If, for some strange reason, you enjoy pounding your forehead into your desk, I have great news for you. 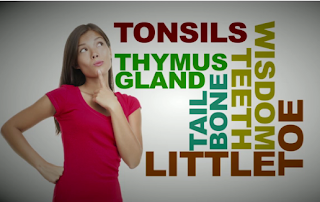 Head over to the Institute for Creation Research's Vimeo page and behold their new campaign entitled "That's a Fact!"

I'm not entirely sure what "facts" they're referring to here, as each video is the same old creationist nonsense, just served up Web 2.0-style.

Consider this entry in the series, entitled "Useless Body Parts," which discusses vestigiality.

The Institute for Creation Research states:


Body parts like tonsils and the appendix were once considered unnecessary organs left over from evolution. But scientists have discovered that these “unnecessary” organs are actually very useful.

The video states that scientists now know that the appendix is useful to our immune system, and that the gall bladder is now known to be useful for digesting fats.

With this information, the video draws the following conclusion:


"God doesn't create junk. When he made Adam and Eve, he declared them...very good! Their sin against god started the process of sickness, decay, and death even after God's judgment upon creation, he activated intricately designed backup systems, like the immune system, so that Adam and Eve, and all their descendants could survive after the fall."

I believe that by "facts," they mean "myths."

While their remarks on the appendix and the gall bladder are partly true, they leave out a lot of important information (this seems to happen a lot with creationist propaganda).

For instance, if a supreme being had designed the appendix as part of a human (a human which was designed and created in its current form), then the appendix would be kind of like the Ford Pinto's exploding gas tank. (OK, that's a bad example, you actually need a gas tank to operate a car, but you get the idea) Yes, the appendix may provide some minor functions in modern times, but it might also kill you. Brandon Miller wrote in LiveScience: "In 2000, in fact, there were nearly 300,000 appendectomies performed in the United States, and 371 deaths from appendicitis. Any secondary function that the appendix might perform certainly is not missed in those who had it removed before it might have ruptured."

(Side bar: we have to stop looking at biological traits and features as having "purposes." A chameleon's camouflage mechanism doesn't have a "purpose" (i.e. hiding from prey), it is simply a mechanism that evolved because the chameleons who were less capable of camouflaging themselves died before they could reproduce.)

Regarding the coccyx, I'm not sure the Institute for Creation Research has a true understanding of atavism. Humans occasionally are born with tails.

If a designer were hired to create efficient organisms, she would certainly be sent back to the drawing board for many of these useless and extraneous features. She certainly wouldn't be receiving praise for efficiency or conservation of building materials.

The kind of silliness we see in these Institution for Creation Studies videos are straight from the creationist propaganda playbook. The willful ignorance is astounding.

These organizations are so fixated on the mission of proving the Bible's inerrancy, that they are willing to completely ignore all evidence except for the few pieces of evidence that work in their favor. If they can blind their captive audience with just a little science, then they believe they have done enough and can then swoop in with their message of hope and salvation.

"Those silly evolutionists say X is true! But what about Y and Z? Wait! Look over there, it's Jesus and heaven and salvation forever! Amen!"

It's the same approach every single time.

Watch for yourself. Watch them all. Or save yourself the headache.