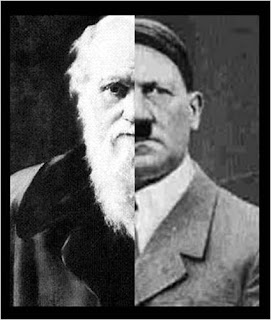 For those unfamiliar with Dr. Purdom, she is one of the actual scientists employed by the Creation Museum. In other words, she is a scientist who has found a way to completely ignore science in order to indoctrinate children with the idea that the earth is only several thousand years old, and that God created humans in their present form.

As I've mentioned before in these pages, evolution deniers like Bryan Fischer, Ray Comfort, and the crew at Answers in Genesis love to play the Hitler card in their attacks on evolution.

FISCHER: So it seems like you could draw a straight line between Charles Darwin, Margaret Sanger, the eugenics movement, and Adolph Hitler. You have an unbroken line from the theory of evolution to Hitler's Germany. Is that an over-exaggeration?

PURDOM: No it's not.

What Fischer and Purdom are trying to do is sully Darwin's name, and his theory of evolution -- a theory which is considered to be a fact by most modern biologists -- by association.

I guess the idea is that if they keep repeating over and over that "evolution = Hitler," the poor souls who pay attention to these loons (over 200 radio stations and over 1 million visitors to the Creation Museum) will simply say, "Welp, Hitler was evil, so evolution has to be a lie!"

Evolution doesn't care. Evolution happens, has happened, and will happen, regardless of who embraces it, or who mirrors its mechanisms for whatever nefarious purpose.

It doesn't matter if Mother Theresa, Pope Benedict, or Adolf Hitler embraced the theory of evolution. It doesn't change anything. Because change is always occurring, and it doesn't give a shit about you, politics, religion, or Bryan Fischer.

Next thing you know, Fischer and Purdom will be bad-mouthing Sir Isaac Newton and his theory of gravitation because of the millions who have died by falling.