Hi, I'm Rick Santorum, And I Have No Self-Awareness

Rick Santorum has been talking a lot about freedom since his trifecta on Tuesday. 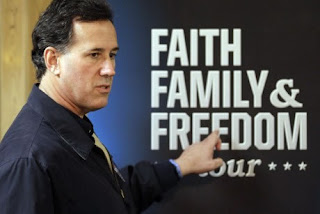 Take a look at some of his official tweets following his big day:

"Freedom is at stake in this election. America needs a president who’ll listen to the voice of the people."

"Our freedoms are slowly being eroded by Obama Admn. I will fight to restore them."

A press release from yesterday announced Santorum was "the first and only candidate to sign the Presidential Pledge for Religious Freedom."

If you've been following Rick Santorum for any amount of time, you might be wondering if the man is completely devoid of any self-awareness.

Certainly Rick Santorum does not mean the freedom to wear a condom while having sex:


"One of the things I will talk about, that no president has talked about before, is I think the dangers of contraception in this country. It's not okay. It's a license to do things in a sexual realm that is counter to how things are supposed to be."

Certainly he can't mean the freedom to have consensual sex with another adult in the privacy of your own home:

And he can't mean the freedom for a doctor to practice his or her profession:

Clearly, he doesn't mean the freedom to be brown in an airport:


"Obviously, Muslims would be someone you'd look at [in airport profiling]."

The freedom to stay married to the person you legally married? Nah.


When asked if he would make same-sex couples get divorced, Santorum responded, "Well their marriage would be invalid."

The freedom to not have religion shoved down your child's throat in public schools? Nope.


"It's very interesting that you have a situation where science will only allow things in the classroom that are consistent with a non-Creator idea of how we got here, as if somehow or another that's scientific. Well maybe the science points to the fact that maybe science doesn't explain all these things. And if it does point to that, then why don't you pursue that? But you can't, because it's not science, but if science is pointing you there how can you say it's not science? It's worth the debate."

The freedom to terminate a pregnancy under the care of a licensed doctor? Of course not. Santorum pines for the good ol' days of back alley abortions:


Look at what’s happened just in our tolerance for abortion. Fifty years ago…60 years ago, people who did abortions were in the shadows, people who were considered really bad doctors. Now, abortion is something to that is just accepted. [...] This is the erosion. And it happens in the medical profession. It happened very fast.

I'm really curious about the freedoms Rick Santorum believes he represents. It sure sounds like he wants nothing more than to establish a Christian Taliban.