Glenn Beck's Jerusalem Rally To Restore Something Or Other 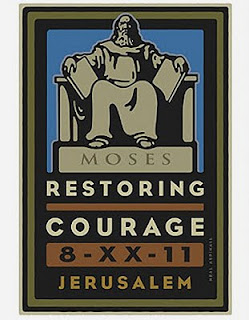 
Tens of thousands of excited Israelis and Americans, music performances, appearances by local and international celebrities, senior politicians and a live broadcast that will reach millions of viewers – this is just some of what is in store for Glenn Beck's upcoming rally "to restore courage," which is set to take place on August 24 in Jerusalem.

The staunch Christian Fox News personality aims to show support for Israel by recreating last August's rally "to restore honor," which he held in Washington, DC.

This year, the Wailing Wall will replace Lincoln Memorial as the backdrop for the event, which will take place at Jerusalem's Old City and the Teddy Stadium simultaneously.

The multi-million dollar production is expected to be attended by a convoy of American dignitaries, including former vice presidential candidate Sarah Palin. US Senator Joe Lieberman, a independent, and Republicans Mitt Romney, Newt Gingrich, Mike Huckabee and Congresswoman Michele Bachmann are to join Beck at the rally as well.

And if that's not enough:


A pyrotechnic show and free snacks and drinks are anticipated as well.


Beck’s obsessions with Jews, from his attacks on George Soros, to his statement that Reform Judaism was like radical Islam, have brought the religious huckster condemnation and scorn. Beck wants to prove himself a true "friend" of Israel with this rally, but his relentless fear- mongering--along with his disappearing audience--suggest a more selfish motive.

Although a Mormon, Beck’s beliefs appear here to be more aligned with conservative Christian beliefs regarding the end-times, and a particular reading of the Book of Revelation that lends itself to raptures, dispensations, and popular culture depictions like Left Behind and a Thief in the Night. Unlike Harold Camping, who just wants his calculations to be correct for once, Beck wants to write himself into the latter days history, by staging a Jerusalem rally in which he invokes not Lincoln and King, like he did on the National Mall, but Moses.

Beck's latest venture is sure to draw a variety of Christian Zionists, his own supporters, and assorted end-timers, who all may get more of a show than they bargained for. Beck's statement, "I've been asked to stand in Jerusalem" suggests that he may be conflating his role with that of the two witnesses of Revelation 11:3: "And I will give power to my two witnesses, and they will prophesy for 1, 260 days, clothed in sackcloth." If Sarah Palin joins him in Jerusalem, you know what's coming.