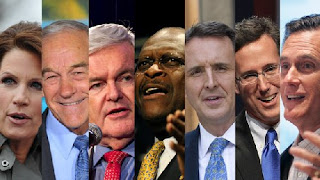 2. Michele Bachmann: "...Inalienable rights [are] given to us from God, not from government. And the beauty of that is that government cannot take those rights away. Only God can give, and only God can take. And the first of those rights is life...I stand for life from conception until natural death."
Excuse me, but you just threw up religion all over my shoes.

3. Newt Gingrich [re: hiring Muslims]: "Now, I just want to go out on a limb here. I'm in favor of saying to people, if you're not prepared to be loyal to the United States, you will not serve in my administration, period. We did this in dealing with the Nazis. We did this in dealing with the Communists. And it was controversial both times and both times we discovered after a while, you know, there are some genuinely bad people who would like to infiltrate our country. And we have got to have the guts to stand up and say, 'No.'"
Please see Mr. Cain and get back to me tomorrow with a report on the "No Religious Test Clause."

4. Rick Santorum: “I’ve not only taken a position, but I’ve taken a bullet for the pro-life movement.”
Tell that to George Tiller.