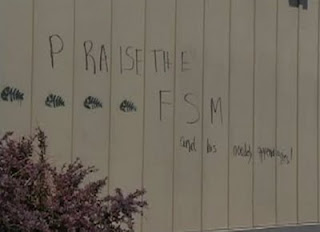 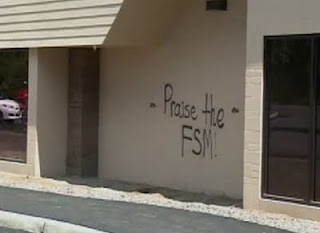 Since the FSM was introduced, it has grown in popularity, and has become a well-known Internet meme. There are books, bumper stickers, and shirts. The image has been embraced by atheists, agnostics, science geeks, and anyone who might oppose the teaching of Intelligent Design in public schools. For, as Thomas Jefferson said, "Ridicule is the only weapon which can be used against unintelligible propositions."

The graffiti was obviously done by someone who understands the meme, and therefore it would make sense to assume it was done by an atheist. Since most atheists claim to live moral lives, and since they are already one of the most maligned groups in America, it was nice to see that atheists are stepping up to condemn the vandalism and to offer to pay for having the graffiti removed.

Obviously, the individual who did this does not represent the larger atheist/humanist community, where some of the biggest concerns are decreasing the amount of suffering in the world and ensuring that all living things are treated with respect -- and doing so without the aid of religion. This individual clearly did not show these concerns.

Hemant Mehta, who runs the blog Friendly Atheist, has started a campaign to raise the money to have the graffiti removed. I think it is a great gesture, and exactly what I have hoped that atheists/agnostics/humanists would do more of -- reaching out and creating relationships, and dialogues, with religious communities. Despite the differences in beliefs, most of us want the same thing -- to reduce suffering in the world, and to be free to believe as we wish, without interference from those who believe differently.

Please visit Hemant's site for more, or make a donation from this page. All money beyond the amount needed will be donated to the Foundation Beyond Belief.