The GOP Hopefuls: Islamophobia, Hypocrisy, and the Politics of Fear

During the New Hampshire Republican debate, we heard from two potential candidates who were not at all shy about their reluctance to hire Muslims. 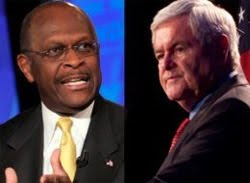 Cain was backing off from his previous statements to Scott Keyes of Think Progress. Keyes asked, "Would you be comfortable appointing a Muslim, either in your cabinet or as a federal judge?" Cain answered emphatically: "No, I will not. And here's why. There is this creeping attempt...to gradually ease Sharia law and the Muslim faith into our government. It does not belong in our government."

Newt Gingrich jumped in with the following statement: "Now, I just want to go out on a limb here. I'm in favor of saying to people, if you're not prepared to be loyal to the United States, you will not serve in my administration, period." He continued: "We did this in dealing with the Nazis. We did this in dealing with the Communists. And it was controversial both times and both times we discovered after a while, you know, there are some genuinely bad people who would like to infiltrate our country. And we have got to have the guts to stand up and say, 'No.'"

The first thing that strikes me as silly about this debate is the ridiculous hypocrisy. Herman Cain and Newt Gingrich are not comfortable with Muslims in the administration because, in part, they don't want Islamic beliefs creeping into US law, or informing policy decisions. Yet, Herman Cain and Newt Gingrich are perfectly fine with their own supernatural beliefs creeping into US law and informing policy decision.

You can't have your pizza and eat it too.

According to Cain and Gingrich, and other GOP hopefuls, it is perfectly acceptable that the President of the United States claim that God chose them to lead the country, that God is the only entity that can give or take rights, and that an immortal soul enters the egg at the moment of conception, but it is entirely not okay if a cabinet member believes in Allah.

Right out of the gate, their comments show a complete disregard for the Constitution's No Religious Test Clause, which states that "no religious test shall ever be required as a qualification to any office or public trust under the United States." Religious tests, in this case would include asking an appointee if they were a Muslim.

The comments also show a complete disregard for the Constitution's Establishment Clause, which states that "Congress shall make no law respecting an establishment of religion, or prohibiting the free exercise thereof."

Of course, all of this does not address the elephant in the room. Gingrich and Cain (and many other Americans, for that matter) believe that Muslims are out to kill Americans. It is true that Muslims have been behind attacks on Americans (here, and abroad). We can all agree that Muslims have killed Americans. Muslims will likely kill Americans again (as will Christians, Jews, Hindus, Buddhists, atheists, and agnostics). But our constitution does not permit us to discriminate against all Muslims simply because some of them have harmed us in the past.

If you apply this logic to any other set of circumstances, it seems absurd. For example, we know, based on sex crime statistics that most child molestations are committed by men. However, knowing this, we can't discriminate against men, denying them jobs where they might be in contact with young children. What we can do in this situation is to take all constitutional and legal precautions to prevent the hiring of someone who might potentially harm these children, or who harmed children in the past. We can perform background checks, check references, conduct numerous interviews, and screen them in any way that is lawful and non-discriminatory. We do what we can do, and then we just have to have faith -- something Cain and Gingrich should know about -- that we have taken the appropriate measures to minimize risk.

We also have to remind ourselves that the remarks of Cain, Gingrich, and other Islamophobes are inflammatory and not reflective of reality.  Let's look at some statistics:

What we ought to be worrying about is non-terrorism-related murder, if we want to protect Americans.  "Since 9/11, there have been approximately 150,000 murders in the United States, more than 15,000 per year," said the study.


With Muslims making up around one percent of the US population, "it is clear that Muslims are engaging in terrorism at a greater rate than non-Muslims -- though at a low level compared with overall violence in the United States."

Foiled attacks or involvement in a terrorist plot by Muslim Americans stand out because they garner so much media attention, "creating the impression -- perhaps unintentionally -- that Muslim American terrorism is more prevalent than it really is," the study said.

The study "puts into perspective the threat presented by domestic radicalization of Muslim Americans," said David Schanzer, director of the Triangle Center.

"Americans should take note that these crimes are being perpetrated by a handful of people whose actions are denounced and rejected by virtually all the Muslims living in the United States," he said.

Cain is familiar with this kind of group exclusion. It was done to him 60 years ago. He had to sit in the back of the bus and drink from "colored" water fountains. He graduated second in his high school class but was refused admission by the University of Georgia. It didn't matter how smart Cain was or how hard he worked. He was black, and the white society around him had decided that blacks were inferior. He was treated as a member of a group, not as an individual. In a word, he was prejudged.

Today, the Ku Klux Klan is still around, but its racism has become more sophisticated. It uses data. "The black male is the greatest perpetrator of both petty crimes and violent crimes in the black communities," says a Klan Web site. Even "Jesse Jackson said that when he's walking down the street at night and he hears footsteps behind him, he's relieved to turn around and see a white person instead of a black person." From this, the Klan concludes, "Minorities … as a people (though there are always exceptions to the rule) are incapable of maintaining or even comprehending the rule of law and order."

That's how prejudice works in the information age. You use statistical averages to generate stereotypes and ultimately to justify differential treatment of people by category.

This is what Cain is now doing to Muslims.

Newt Gingrich stated in the NH debate, "The Pakistani who emigrated to the U.S. became a citizen, built a car bomb which luckily failed to go off in Times Square was asked by the federal judge, how could he have done that when he signed – when he swore an oath to the United States. And he looked at the judge and said, 'You’re my enemy. I lied.'"

I believe Gingrich, on three occasions, swore to have and to hold, from this day forward, for better, for worse, for richer, for poorer, in sickness or in health, to love and to cherish 'till death do him part. So much for loyalty oaths.

Newt is out of his skull to believe that he is going to pull some Minority Report shit and preemptively filter out individuals who are going to do harm to the United States. If that were the case, we would have needed a way to prevent rich white men from being hired in presidential administrations. But that's discrimination, Newt, even if it might have saved thousands of American lives (we've lost almost 3 times as many Americans in these oil wars as we did on 9/11).

The Islamophobia of the GOP hopefuls recalls the same scare tactics they have used to rally voters for decades. This is our Red Scare. Like clockwork it crops up every election cycle, this fear of the unfamiliar.  If it's not Commies, it's the gays, or drugs, or illegal immigrants, or socialism, or the Black Panthers.  They use it because fear is visceral. Nothing gets people riled up like the fear that something is out to destroy their American way of life, especially if you can threaten their religion and their lives in one fell swoop. There is now a cottage industry in peddling the fear of Sharia Law, and Gingrich and Cain are in the thick of it.

The bottom line is, if we wish to preserve the freedom guaranteed by our constitution, there is some amount of risk that must be accepted. If we want to go down the road of discriminating against people based on their religious beliefs, then that's a slippery slope. Which beliefs are considered to be indicative of danger to America? And if we are to start equating religious beliefs with danger, I would argue that many Evangelical Christian beliefs are dangerous, and that we should not allow Evangelicals into positions in government administration.

Is it not dangerous enough that we had a President who made war decisions (which led to thousands of American deaths) based on Biblical prophecy?  Is it not dangerous that we have three potential Republican presidential candidates who have each claimed that God sent them messages encouraging them to run for president? Isn't it dangerous enough that Michele Bachmann believes that if the United States turns its back on Israel, "a curse" will be placed on the land, citing Genesis 12:3? Isn't it dangerous that Rick Santorum strongly believes that Intelligent Design should be taught in school, and that the "right to privacy...doesn’t exist in [his] opinion in the United States Constitution" when it comes to sexual behavior?

This bunch at the NH debate is in lockstep with the extreme Christian Right -- moreso than any group of candidates in history. Their concern about dangerous religious ideas infiltrating government is the pinnacle of hypocrisy.
Posted by eshep on 6/17/2011