I'm fascinated with misconceptions. We all have them. We are gullible people, and if anything is true, it's the fact that if something is repeated enough times, it becomes "true" to us. 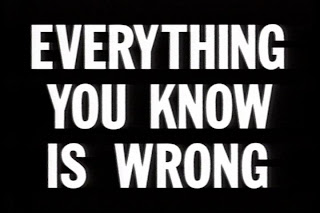 Obviously, the very nature of Wikipedia, which relies on the general public to keep its entries accurate, would seem a likely place to find misconceptions. (And we saw just recently that people will change entries to reflect some people's misconceptions.)

But if there are any pleasant surprises that came with the Internet age, it was the realization that a public-produced, and -policed online encyclopedia will be surprisingly accurate, fair, and ridiculously up-to-date. (And if you want a particularly bizarre meta experience, read the Wikipedia entry for Wikipedia.)

One particular page on Wikipedia that I find fascinating, as someone interested in mythology, human gullibility, and misinformation, is their entry called List of Common Misconceptions.

The list is divided into sections: History, Science, Sports, etc., and even the most self-assured will find something that they did not know.

Some notable entries that fall within the subject matter often covered on these pages (the below examples are truncated -- see the Wikipedia entry for full explanations):

And some random entries that are entertaining:
Of course, some of these entries could be misconceptions.
Posted by eshep on 6/17/2011