Some Important Details on Saturday's Rapture 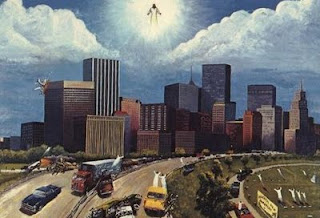 Some important new details to help you plan for this Saturday's rapture. According to one of Harold Camping's followers, the rapture will begin at approximately 6pm. I know lots of folks are busy on Saturdays with their children's soccer games and dinner plans, but don't worry about missing out on the start of the rapture. There will be a massive earthquake to let you know it's underway.


…"starting in the Pacific Rim at around the 6 p.m. local time hour, in each time zone, there will be a great earthquake, such as has never been in the history of the Earth," he says. The true Christian believers -- he hopes he's one of them -- will be  "raptured": They'll fly upward to heaven. And for the rest?

"It's just the horror of horror stories," he says, "and on top of all that, there's no more salvation at that point. And then the Bible says it will be 153 days later that the entire universe and planet Earth will be destroyed forever."

I suggest that people keep off of Twitter and Facebook to avoid any spoilers.
Posted by eshep on 5/17/2011