Sexual Revolution Cited as Cause of Catholic Abuse Scandals 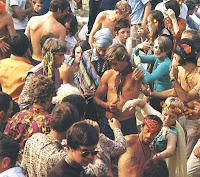 Via the New York Times:


A five-year study commissioned by the nation’s Roman Catholic bishops to provide a definitive answer to what caused the church’s sexual abuse crisis has concluded that neither the all-male celibate priesthood nor homosexuality were to blame. Instead, the report says, the abuse occurred because priests who were poorly prepared and monitored, and were under stress, landed amid the social and sexual turmoil of the 1960s and ’70s.

What else were these priests to do while everyone else was at Woodstock having sex with children?
Posted by eshep on 5/18/2011