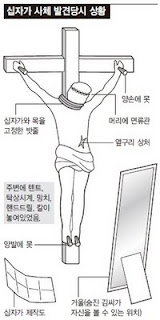 A middle-aged South Korean taxi driver found dead on a crucifix after Easter weekend nailed himself to the cross, police said Tuesday, adding his deep religious faith helped him withstand the pain.

The body of the 58-year-old man surnamed Kim was found on May 1 on a wooden cross in an abandoned quarry in the central city of Mungyeong, with nails protruding through holes in his hands and feet.

He was wearing only underpants and a crown of thorns. He had a stab wound on his right waist and several whip marks in an apparent reconstruction of Christ's death.

How did he do it?

Forensic experts reconstructed the death based on notes found at the scene describing how to carry out a crucifixion, local police said, adding the handwriting matched Kim's.

They said Kim, standing on a small footrest on the cross, nailed his feet to the cross. He lashed his neck and chest before stabbing himself in the waist and piercing his hands with a power drill. Kim then apparently slipped his pierced hands over nails on the cross.

"We believe that deep religious faith made it possible to carry out the series of extraordinary actions involving extreme pain," police said, adding Kim died of suffocation and blood loss.

That's certainly one way to celebrate Easter.
Posted by eshep on 5/18/2011