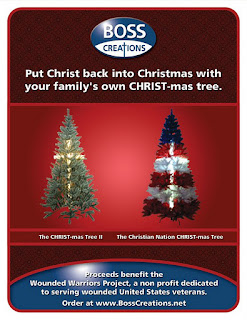 While taking in the abundance of Christmas-themed yard displays this year, the CHRIST-mas Tree popped into my mind.

For those of you unfamiliar with the CHRIST-mas Tree, news of its existence created somewhat of buzz in 2009, and it became a minor internet phenomenon. Stephen Colbert even featured the tree in a segment called Blitzkrieg on Grinchitude.

Essentially, the CHRIST-mas tree was a tree that literally puts the Christ back in Christmas -- in the form of a crucifix. It also was available in a red, white, and blue 'Christian Nation' model.

The company also sold a 'Crown of Thorns' tree-topper, as well as other decorations 'designed to remind us of the true meaning of the Christmas holiday.'

According to Boss Creations, the creators of the CHRIST-mas Tree:


In recent years, our Christmas holiday has been made to become a generic holiday for all religions with many being forced to call it a “Holiday” season instead of Christmas season. We, as Christians, must take a stand and rescue our religious holiday. We at Boss Creations believe that one way to do this is to decorate with more Christian-themed holiday decorations including The CHRIST-mas Tree.

We had figured a way to enhance the tradition of decorating a tree for Jesus at Christmas by adding a cross that acts as a reminder of Him. By changing our tree to include a cross, we are making a statement that we want to keep our Christmas holiday! Our new tree and decorations ideas will not only help to enhance our celebration of the Christmas holiday but will help to enlighten those who may decorate for Christmas but may not be “Christians.”


Describing the CHRIST-mas Tree, Stephen Colbert said, "It’s like George Washington and Jesus teamed up and declared independence from taste...Best of all, this tree can be used year-round. Christmas, Flag Day, Fourth of July, hell, this thing would look pretty good in a gay pride parade."

I was curious to know what the CHRIST-mas Tree folks were up to this year. Although their tree made the biggest waves in 2009, there were several stories and mentions in 2010.

Yet I hadn't heard anything at all about the CHRIST-mas Tree in 2011. I was curious to find out if there were any new models, or if perhaps they had expanded  into other areas of Christmas decoration market (An inflatable Jesus would be truly amazing, wouldn't it?).


When Boss Creations was around, it was the best source for your faith-inspired holiday decoration needs. We offered a variety of unique, innovative and high-quality Christian-themed decorations that were sure to enhance your holiday celebration!

Our past collections of inspiring CHRIST-mas trees, the Crown tree topper, nativity decorations, wreaths and other decorations were designed to remind us of the true meaning of the Christmas holiday. We still hope that you’ll continue to help put Christ back into Christmas this holiday season. 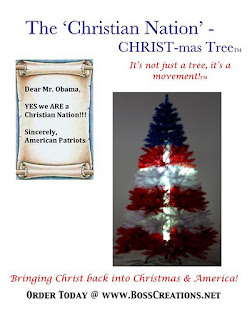 While there is nothing to indicate what happened, one can only assume that sales may have been a problem. The three people who have commented on the Web post quoted above, did so in 2011, and none of them seemed aware that the CHRIST-mas tree was no more.

I want a tree. Is there any left

In addition, the company's Twitter feed has been silent since April.

There are, however, several blog posts on their site, which stay true to their mission of fighting the War on Christmas.

The CHRIST-mas Tree itself, however, appears to have given up the ghost -- and, sadly, there is no indication of a resurrection.