On 11.11.11, the American evangelical firebrand Lou Engle plans on gathering thousands at Ford Field in Detroit, MI, with the hopes of converting the area's large population of Muslims to Christianity. 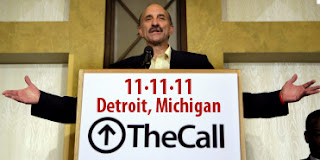 Who is Lou Engle?

Lou Engle is a senior leader of the International House of Prayer, a well-known Missouri-based evangelical charismatic Christian missions organization which has been called "Kansas City's biggest religious phenomenon in a century." He has been called a radical theocrat, and his sermons have been known to "venture into bloodlust." He has praised Uganda's Kill the Gays Bill.

What is The Call?

The Call is an organization which sponsors prayer meetings devoted to various evangelical causes, including abortion, homosexuality, and same-sex marriage.
Their events feature sermons, prayer, Christian rock music, fasting, and the confessions of personal and national sins. If you are imagining Rick Perry's The Response, you're not too far off. (The International House of Prayer was one of the organizers of Perry's rally.) The Call, like Perry's prayer rally, has been endorsed by many Christian right staples, including Mike Huckabee, Tony Perkins, and James Dobson. 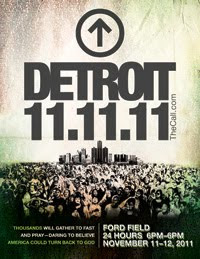 This particular event on 11.11.11 is being held in Detroit, because, according to the organizers, it's a symbol of an America in crisis:


Detroit has become a microcosm of our national crisis—economic collapse, racial tension, and the shedding of innocent blood of our children in the streets and of our unborn.

But the place where they say there is no hope, God has chosen as His staging ground for a great communal healing and His house of prayer for all nations. Therefore, we are calling the nation to a 24-hour solemn assembly, daring to believe that Detroit’s desperation can produce a prayer that can change a nation.

Come and take your place on the wall in Detroit, where we will ask God to send fire on our hearts, to forgive our national guilt and establish justice in our land.

There's a little more to it than that, actually. Nearby Dearborn, MI, has the largest population of Muslims in America. It also is the home of the country's largest mosque. Although The Call's web site makes no overt references to Muslims, Lou Engle would like to convert these Muslims to Christianity. And what a better way to do it than through his brand of Christian love.

Right Wing Watch put together a video of "Engle, along with Rick Joyner and Jerry Boykin, who serve with Engle on The Call’s national leadership team, stating their beliefs that Islam is literally “demonic” and Muslims need to convert to Christianity."

Who wouldn't want to convert after viewing this?