While there are a lot of interesting findings, the most interesting are the findings related to voters' attitudes about the religious affiliation of potential presidential candidates. 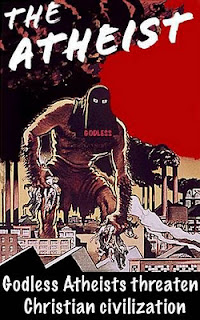 In Evangelicals We Trust
In contrast, an Evangelical president is much less threatening, with only 28% of all voters feeling uncomfortable (18% of Republicans, 32% of Democrats, and 31% of Independents). Americans tend to be fearful of the unknown. And while George W. Bush made many uncomfortable, it is a discomfort we are quite familiar with. 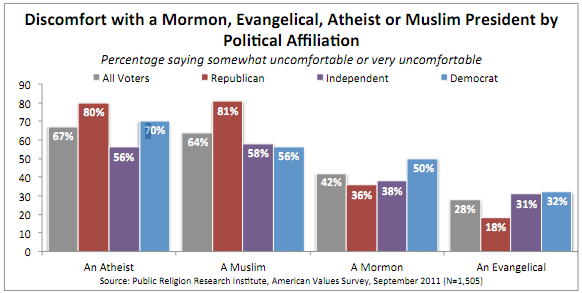 The kids are alright?
One trend that is not surprising is that millennials (18-29) seem to be much less bothered by the religious affiliations (or lack of affiliations) that bother older voters...well, except for Mormons.

A little over half (54%) of millennial voters say they would be uncomfortable with a Mormon president, compared to 39% of senior voters (65 and older).  It is unclear if millennials are simply more likely to have seen South Park, or if they are just creeped out by Glenn Beck. I mean, they are weird, right?

There's much more to dig into, including attitudes on income equality, Obama's performance, and the current GOP candidates-in-running. View the report here (pdf).