Michael Shermer On The Evolutionary Roots Of Political Tribalism

Science writer and historian Michael Shermer isn't afraid to make some generalizations about people and their political ideologies. We all, more or less, belong to tribes, he says, and the characteristics are fairly easy to predict: 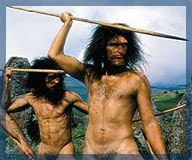 This is why, for example, the political beliefs of members of each party are so easy to predict. Without even knowing you, I predict that if you are a liberal you read the New York Times, listen to NPR radio, watch CNN, hate George W. Bush and loathe Sarah Palin, are pro-choice, anti-gun, adhere to the separation of church and state, are in favor of universal health care, vote for measures to redistribute wealth and tax the rich in order to level the playing field and believe that global warming is real, human caused and potentially disastrous for civilization if the government doesn’t do something dramatic and soon. By contrast, I predict that if you are a conservative you read the Wall Street Journal, listen to conservative talk radio, watch Fox News, love George W. Bush and venerate Sarah Palin, are pro-life, anti-gun control, believe that America is a Christian nation that should meld church and state, are against universal health care, vote against measures to redistribute wealth and tax the rich and are skeptical of global warming and/or government schemes to dramatically alter our economy in order to save civilization.

Some might beg to differ. Certainly there are those of us who are moderate, who fit somewhere in the middle of these two ideological descriptions. Some of us may even find ourselves migrating from one side of the spectrum to the other over the course of our lifetime. But I'm willing to bet that, for the most part, Shermer is correct. We do tend to like to seek out information that supports our beliefs, while rejecting information which calls our beliefs into question. We all are guilty of drinking the kool-aid, to various degrees.

Shermer's predictions bring up two questions: 1) Why are we so prone to such tribalism? and 2) Why are these tribal affinities remain so predictable -- and so strong -- despite our unlimited access to information and our capacity for critical thought?

Shermer describes how this tribalism has evolutionary roots, and was crucial to our survival. He takes us back to our hominid ancestors who lived in small bands on the African Savanna:


There, in those long-gone millennia, were formed the family ties and social bonds that enabled our survival among predators who were faster, stronger, and deadlier than us: unwavering loyalty to your fellow tribesmen was a signal that they could count on you when needed. Undying friendship with those in your group meant that they would reciprocate when the chips were down. Within-group amity was insurance against the between-group enmity that characterized our ancestral past. As Ben Franklin admonished his fellow revolutionaries, we must all hang together or we will surely hang separately.

In this historical trajectory our group psychology evolved and along with it a propensity for xenophobia — in-group good, out-group bad. Thus it is that members of the other political party are not just wrong — they are evil and dangerous. Stray too far from the dogma of your own party and you risk being perceived as an outsider, an Other we may not be able to trust. Consistency in your beliefs is a signal to your fellow group members that you are not a wishy-washy, Namby Pamby, flip-flopper, and that I can count on you when needed.

Surely, now that we have evolved the capacity for rational thought, and live in such a racially and ideologically diverse society, we have overcome this tribal mentality, right?


Research in cognitive psychology shows, for example, that once we commit to a belief we employ the confirmation bias, in which we look for and find confirming evidence in support of it and ignore or rationalize away any disconfirming evidence.

Shermer describes a study conducted during the 2004 Bush-Kerry Presidential election. Drew Westen, a psychologist at Emory University scanned the brains of 30 men, half of which were characterized as "strong" Republicans, and half which were characterized as "strong" Democrats. These men's brains were scanned as they watched videos of both Bush and Kerry making statements which contradicted previous statements.


Not surprisingly, in their assessments Republican subjects were as critical of Kerry as Democratic subjects were of Bush, yet both let their own preferred candidate off the evaluative hook. The brain scans showed that the part of the brain most associated with reasoning — the dorsolateral prefrontal cortex — was quiet. Most active were the orbital frontal cortex that is involved in the processing of emotions, the anterior cingulate that is associated with conflict resolution, and the ventral striatum that is related to rewards. Roughly translated: we have an emotional reaction to conflicting data, rationalize away the parts that do not fit our preconceived beliefs about a candidate and then receive the positive reinforcement of a neurochemical hit, probably dopamine.

In other words, reasoning with facts about the issues is quite secondary to the emotional power of first siding with your party and then employing your reason, intelligence and education in the service of your political commitment.

Studies like these tend to show us what we already assume about human nature -- we have seen it enough in our own experiences. But understanding the science behind such instincts reminds us that, no matter how evolved we think we are, we are still, in many ways, quite primal.
Posted by eshep on 11/07/2011