Mississippi's 'Personhood' Amendment Is Ludicrous (It May Be Coming to Your State, Too)

Update: The Mississippi personhood amendment was defeated on Tuesday, Nov. 8, but other efforts are underway in other states. This initiative is not going away anytime soon.

Mississippi is on the verge of passing a constitutional amendment that would define a person as a fertilized egg.

The so-called "personhood" amendment is on the November 8 ballot, and according to the most recent polling, it is very likely to pass.

This should be ridiculously alarming to anyone who is not completely out of touch with reality. Not only would the amendment have cascading legal implications, it would also have serious impact on the health and rights of all women. In addition, the amendment endorses all sorts of religious ideas, whether or not those are defined in the legislation.

Slate served up a slightly humorous, yet incredibly scary, list of legal questions that would arise from the legislation, including the following:

For legal purposes, would your birthday still be your “birth” day? Or your fertilization day?

Could you arrest women for smoking or drinking while pregnant? Could the state file a child abuse case against a mother who didn’t wear a seatbelt or otherwise endangered her fetus?

If a doctor doesn't take all possible steps to stop a miscarriage, would that be manslaughter?

Could you post ultrasound photos of your fetus (naked) on Facebook? Or would that be child pornography?

Would you be an American citizen if you were conceived in Mississippi but born elsewhere? Could there be “anchor babies” whose parents come to the United States, have sex, and then return home to Mexico for their baby’s birth?

If a woman eats food contaminated by Listeria and miscarries, could the agribusiness be prosecuted for murder?

What about ectopic pregnancies? If the embryo is not removed, it could kill the mother. Should the mother or the doctor be prosecuted for manslaughter if they remove it? Maybe it would be fairer to prosecute the embryo. If the fertilized egg is a person, isn't that person trying to commit murder-suicide?


Granted, some of these examples seem silly. But their ludicrousness underscores a few things: A) Such an extreme and broad amendment has huge implications on the interpretation of the law moving forward, and B) The amendment is ludicrous from the get-go.

Let's look at the human blastocyst. (By definition of the personhood amendment, a blastocyst would now constitute a person.)

Neuroscientist and philosopher Sam Harris wrote about blastocysts in relation to the ethics of stem cell research, but his arguments are just as apt in debating 'personhood':


A three-day-old human embryo is a collection of 150 cells called a blastocyst. There are, for the sake of comparison, more than 100,000 cells in the brain of a fly. [These] human embryos...do not have brains, or even neurons....Perhaps you think that the crucial difference between a fly and a human blastocyst is to be found in the latter's potential to become a fully developed human being. But almost every cell in your body is a potential human being, given our recent advances in genetic engineering. Every time you scratch your nose, you have committed a Holocaust of potential human beings. This is a fact. The argument from a cell's potential gets you absolutely nowhere. 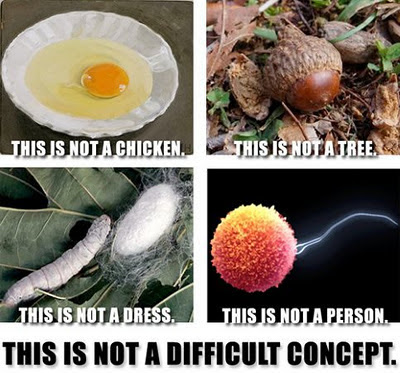 Twenty percent of all pregnancies result in miscarriage. If all fertilized eggs are 'people,' then 20 percent of all people are killed before they are born. Will there be investigations to determine who was responsible for the untimely death of 1/5 of all 'people' in Mississippi? Will every woman who suffers a miscarriage be interrogated? If it was natural, is God the most prolific serial murderer in Mississippi's history?

Now that I've brought religion into the picture (how can one not?), let's look at this business of souls. Harris writes:


But let us assume, for the moment, that every three-day-old human embryo has a soul worthy of our moral concern. Embryos at this stage occasionally split, becoming separate people (identical twins). Is this a case of one soul splitting into two? Two embryos sometimes fuse into a single individual, called a chimera. You or someone you know may have developed in this way. No doubt theologians are struggling even now to determine what becomes of the extra human soul in such a case.

Isn't it time we admitted that this arithmetic of souls does not make any sense? The naive idea of souls...is intellectually indefensible.

The vote occurring in Mississippi should be very concerning to anyone who cares about privacy, science, liberty, and the enforcement of religious ideology as law. This amendment would ban all abortions, including those that result from incest and rape. It would ban IUDs and 'morning-after pills.' It would render embryonic stem cell research illegal. It would hamper in-vitro fertilization treatment.

And, if successful, it will serve as a template for similar amendments across the country (there are already efforts brewing in Florida, Michigan, Montana, Ohio, Wisconsin and other states), and passage could fundamentally transform the entire framework of laws in each state.

But what should be most troubling about this amendment is it attempts to define legally something which has yet to be defined by science. There is no consensus whatsoever as to when 'life' begins. There is no consensus on the definition of 'life,' in reproductive terms. The legislation attempts to define life in language that is in no way scientific. What it attempts to do is say that a bolt comes down from on high at the moment a sperm fertilizes an egg, and transforms it into a person.

This is supernaturalism, it's not supported by science, and it's about to become law.