Rabbi Thinks Non-Believers Actually Believe (But I Don't Believe Him) 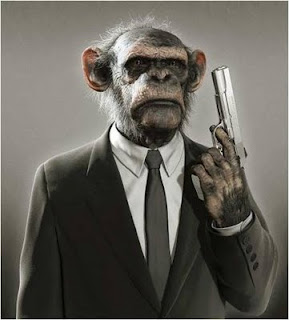 Over at Huffington Post, Rabbi Adam Jacobs tries to make a case that everyone, regardless of what they tell you (or what they think they believe), believes in God.

While I was willing to give the Rabbi the benefit of the doubt, it didn't take long to realize that I don't think he knows what he's talking about.

In the post The God Test: Why Really Everyone Believes writes:


Try as I might, I continue to be startled by the mindset of the non-believer. It's not so much that I can't grasp the notion that someone could believe that there is no Creator and that there is no grand design to the universe, but rather that so many of their choices and thinking patterns seem to suggest that they believe something quite unlike that which they profess. Often, I've inquired of non-believers if it at all vexes them that nothing that they have ever done or will ever do will make the slightest difference to anyone on any level? After all, one random grouping of molecules interacting with another has no inherent meaning or value. I still await the brave soul (or neuron complex if you prefer) who will respond that I am quite correct; that no thought, deed, action or impulse is any more significant or meaningful than any other, that statements like "I would like to enslave all of humanity" and "I would like a chocolate bar" are functionally equivalent, and that their very own thoughts and words are intrinsically suspect as they are nothing more than some indiscriminate electro-chemical impulses. Until then, I will carry on believing that most "non-believers" actually believe a bit more than they generally let on, or are willing to admit to themselves. That, or that they have contented themselves to willfully act out fantasies that bear no relation to their purported worldview.

Rabbi Jacobs makes his first misstep when he suggests that the very nature of non-belief requires the non-believer to concede that his or her actions and accomplishments lack meaning or value. Either Jacobs has not talked to many non-believers, or he chooses to ignore the fact that meaning does not require a creator or a religion.

Jacobs poses three questions to non-believers. He believes that the non-believers' answers to these questions will likely prove that they actually do believe in God. He says, "I posit that if you are inclined to answer any of them from a non-materialist perspective then you might secretly suspect that there are grander cosmic forces at work than those discernible on a purely empiric level, or, possibly, that you are a victim of societal programming."

What are the questions?


1. Would you be willing to sell your parent's remains for dog food?

2. You and someone you dislike are stranded on a desert island with a functioning ham radio. One day you hear that there has been a terrible earthquake that has sent a massive tsunami hurtling directly for your island and you both have only one hour to live. Does it make any difference whether you spend your last hour alive comforting and making amends with your (formerly) hated companion or smashing his head in with fallen, unripe coconuts?

It is apparent that the good Rabbi is unable to understand that respect, compassion, empathy, heritage, ritual, morality, and pleasure can all exist outside of religion.

I'll address Jacobs' questions one at a time:

1. As a non-believer, I would not sell my parents' remains for dog food because I am an evolved human being with a strong sense of respect for family, heritage, and ritual. Do I believe that by not disposing of my parents' remains in an appropriate manner I would be punished in some metaphysical sense? No. Do I believe that my parents would be aware of my lack of respect from beyond the grave? No. Then why would I not take the materialistic route, and accept the dog food? Because -- get this -- non-believers actually are capable of placing value on non-material things. Like believers, we evolved to be ritualistic beings with a strong sense of heritage. Because humans have had rituals associated with the burial of loved ones for at least 130,000 years, and because these rituals remind us of who we are, and where we come from, we (yes, even non-believers) find comfort in these rituals. There is a psychological and emotional component to closure (obviously) that transcends religion. There are many non-religious components to a proper burial (respect, sanitation, etc.), just as there are religious components (the afterlife, etc.). These rituals, regardless of their origins, do not lose their importance if one does not believe in a supernatural being.

2. The reason I would not smash my 'hated companion' with a coconut upon hearing about the tsunami is twofold:

3. Of course, love, art, beauty and morality are intrinsically significant. The reason that we find them significant is actually quite simple: they evoke feelings of pleasure. Humans place value on things that bring pleasure. When we are in love, when we view wonderful artistic expressions or natural beauty, or when we do good things, we feel pleasure, warmth, and appreciation. These things have value not only to us, but to others. As social beings with evolved capacities for reciprocity and compassion, we gain pleasure from producing art and music. We gain pleasure from expressing love to others, and by performing acts of kindness. Art can be a source of communication. Beauty, love, and morality enhance our lives and our well-being. I would ask you, Rabbi, why do we find expressions of love in animals? Why do birds, who have no known capacity for religious thought, sing or exhibit their beautiful plumage? All of these things you list (love, art, beauty, morality) exist in nature: apes and birds woo mates with song and beauty. They participate in altruistic behavior daily. Yet it is not required that they believe in a creator.

I find Jacobs' view of non-belief to be rather sad. It mirrors the view of many -- that without religion, life is meaningless, or that without religion, society would dissolve into barbarism, greed, and anarchy. This view shows how very little Jacobs, and those who share his views, understands about where humans came from, and how we got here. If we study the evolution of religion alongside the evolution of humans (and of societies), we learn that we were social, compassionate beings long before the God of monotheism arrived on the scene. I am not denying the role of religion in shaping humanity and society, but just as we evolved morality without the Abrahamic God, morality will continue to evolve regardless of a belief in said god. Just as polytheistic (and other pre-monotheistic) humans exhibited moral codes, a hypothetical post-Abrahamic society of the future would also exhibit moral codes. Many of these codes would certainly have ties to pre-monotheistic societies, just as many of these future codes might improve upon the sometimes barbaric and primitive moral codes of the Bible.


If you are willing to define the human experience as nothing more than an arbitrary series of chemicals, atoms and other blind and indifferent forces acting in concert, then at the end of the day, you necessarily concede that human emotion and experience are intrinsically meaningless. What difference, then, does it make if you (or others) choose to completely disregard concepts like kindness, decency and love? The non-believer is duty bound to say that it makes no difference whatsoever, as meaning -- in all of its varied splendor -- resides exclusively with those who acknowledge its basis. One that is neither blind nor random nor physical.

If you chose the non-materialistic answer to any of these questions (no, yes, yes) you may be more of a believer than you think.

Rabbi, most non-believers do not define the human experience as nothing more than arbitrary series of chemicals, atoms, etc. And those who might, are not saying in any way that human emotion and experience are intrinsically meaningless.

Science may tell us that we arrived via a series of chemical reactions, mutations, and a complex array of mechanisms. But at the end of the day, we are here, and we will do what we will do. It took us 4.5 billion years to arrive, and over the course of that amazing journey we developed the ability to create and to find meaning. We do good things because good actions promote societal cohesiveness, good-will, and ultimately, survival. We ostracize those who do bad things, such as killing others, because such behavior threatens that cohesiveness and survival. Even if we took religion completely out of the equation for everyone, most of us would still choose to do the right thing. As social beings, we want to belong. As survivalists, we want to survive and reproduce. And as empathetic beings, we want to make others happy. Because, ultimately, we want to be happy. We can't be happy when everyone is killing everyone.

The meaning of life is up to each of us. We do not have to understand where the first life came from in order to appreciate how fortunate we are to be alive. Originally, life's purpose was simply to survive, to replicate. And now, our purposes are defined by what we choose to do with our lives.