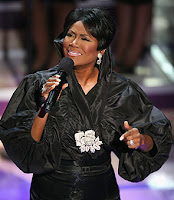 
Pentecostal televangelist and self-professed prophetess Juanita Bynum has sparked curiosity among some Internet users and the Christian community for several comments on the minister's Facebook page where she appears to type "in tongues."

In a series of posts published on Aug. 17, on one of Bynum's many Facebook pages, the minister typed messages where it was believed by commenters and critics that the she was praying in tongues.

We've all heard what it sounds like to speak in tongues, right? (Here's some tonguespeak at Sarah Palin's former church.)

Well, speaking in tongues while typing is like that. Sort of. Okay, not really. It's kind of more like when your cat steps on your keyboard.

According to Christian Post, several more posts appeared on Bynum's page that were just as bizarre. Many began posting on Bynum's Facebook wall, asking her about the episodes.

One 'fan' wrote, "looks like you lost a few followers after your attention seeking post."Beware of false prophets who come disguised as harmless sheep but are really vicious wolves.- Matthew 7:15." Another wrote, "YOU REALLY NEED TO STOP PLAYING WITH GOD THE WAY YOU ARE PLEASE SERIOUSLY SPEAKING IN TOUNGES ON FACE BOOK LOOK I CAN DO IT TO IF I WANTED TO PLAY WITH GOD SHABBA SHABBBA KIJBFJHBFREHVBFVBGIHOFKVBB VJKVFNWRO SEE REALLY." And another: "Its called speaking in tongues not thumbs!! AMEN and GOODNIGHT!" Bynum has not publicly addressed the issue, and did not respond to Christian Post's requests for a comment.

To be fair, Bynum never claimed to have purposefully typed 'in tongues,' but she obviously doesn't seem to mind the attention.

She either did it on purpose, did it on accident and is pretending it was on purpose, or she's on some of that shit they found on Zachary Tims.