Scientologists: Not Quite Over That 'New Yorker' Piece 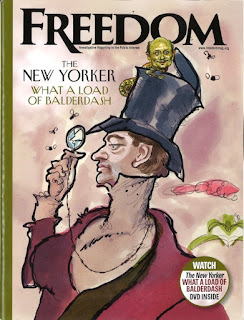 
Three representatives from the Church of Scientology were standing outside Conde Nast headquarters this morning and distributing copies of their Thetan-inspired magazine Freedom. This month’s issue is a parody of The New Yorker that’s filled with articles attacking writer Lawrence Wright and his employer for a 24,000 word piece about “Crash” director Paul Haggis.

The Church of Scientology claims to have met with New Yorker staff during the fact-checking process, bearing 48 binders full of alleged errors in Wright's piece. Apparently the meeting didn't go the way the church wanted, so now they're getting all Spy Magazine on them.

Animal New York has several scans from the magazine.
Posted by eshep on 8/31/2011