'The Magic Of Reality': Richard Dawkins' Science Book For All Ages 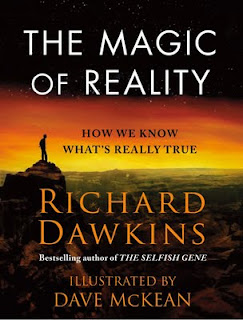 No matter what you think of Richard Dawkins, he has an extraordinary gift for explaining science's complexities in a way that anyone can easily understand. I credit him, along with Jerry Coyne, David Sloane Wilson, and others, with helping me (an English major who did never had much interest in science, and who can't recall hearing about evolution in school) to really grasp the complexity and beauty of evolution.

After several wonderful books written for adults, including The Selfish Gene, The Greatest Show on Earth, and The Ancestor's Tale, Dawkins has undertaken the task of writing a sprawling, 272-page, illustrated science book for all ages. The book is called The Magic of Reality: How We Know What's Really True.

As the father of 3 very curious young boys, I'm excited to get a hold of this book. It seems perfect for reading and discussing with children, and for keeping readily available for those times when kids ask questions about how things work. I've been disappointed with much of the books presently out there for kids about science, specifically those that address evolution (with the exception of Daniel Loxton's wonderful illustrated book, Evolution: How We and All Living Things Came to Be). Dawkins' book will be a welcome addition to our shelves.


Magic takes many forms. Supernatural magic is what our ancestors used in order to explain the world before they developed the scientific method. The ancient Egyptians explained the night by suggesting the goddess Nut swallowed the sun. The Vikings believed a rainbow was the gods' bridge to earth. The Japanese used to explain earthquakes by conjuring a gigantic catfish that carried the world on its back—earthquakes occurred each time it flipped its tail. These are magical, extraordinary tales. But there is another kind of magic, and it lies in the exhilaration of discovering the real answers to these questions. It is the magic of reality—science.

Packed with clever thought experiments, dazzling illustrations and jaw-dropping facts, The Magic of Reality explains a stunningly wide range of natural phenomena. What is stuff made of? How old is the universe? Why do the continents look like disconnected pieces of a puzzle? What causes tsunamis? Why are there so many kinds of plants and animals? Who was the first man, or woman? This is a page-turning, graphic detective story that not only mines all the sciences for its clues but primes the reader to think like a scientist as well.

Richard Dawkins, the world's most famous evolutionary biologist and one of science education's most passionate advocates, has spent his career elucidating the wonders of science for adult readers. But now, in a dramatic departure, he has teamed up with acclaimed artist Dave McKean and used his unrivaled explanatory powers to share the magic of science with readers of all ages. This is a treasure trove for anyone who has ever wondered how the world works. Dawkins and McKean have created an illustrated guide to the secrets of our world—and the universe beyond—that will entertain and inform for years to come.