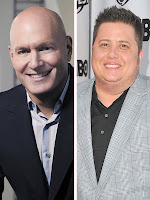 On Tuesday, Dr. Keith Ablow, the oft-featured Fox News in-house psych, stated that parents should not let their kids watch Chaz Bono on 'Dancing With The Stars,' and claims that the show is "promoting transgenderism as if it were a civil right."

Dr. Blowhard is ratcheting up quite a track record of making inflammatory statements on gender and sexuality that are completely at odds with conclusions drawn by major scientific, medical, and professional organizations. If you recall, he ignited a firestorm for his statements on the J. Crew catalog which featured a mother painting her son's toenails pink.

In the segment broadcast on Fox News, Ablow stated, "There may be tomboys watching...They don't really need to be encouraged to say, '"Hey wait, maybe i'm not a tomboy. Maybe I'm a boy."" Ablow infers that kids who watch Chaz Bono perform on 'Dancing With The Stars' will seek out sex change operations rather than 'ride out a phase.'