The Southern Poverty Law Center's Hatewatch blog reports on a mysterious company selling a product called Silver Bullet Gun Oil. The gun oil is targeted towards the US military, according to their dubious online pitch, and is laced with 13% pig fat with the intention of denying Muslims entrance to paradise. 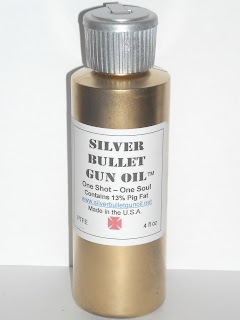 
SILVER BULLET GUN OIL, is a HIGHLY EFFECTIVE Counter-Islamic terrorist force multiplier. SILVER BULLET GUN OIL was designed specifically to put Demoralizing FEAR and TERROR into SUPPOSEDLY "Fearless" Islamo-Fascist terrorists. It was created with the "TRUE BELIEVER'' in mind. According to the Koran, Allah states, "Any of my followers contaminated by swine at the time of his death will be denied entry to my paradise forever, I HATE THE STENCH OF SWINE."

SILVER BULLET GUN OIL can be used in or on ALL weapons and weapons systems. Put a drop on the remains of ''suicide bombers'' for the same effect-No Paradise! FOR MAXIMUM IMPACT DOWNRANGE; USE ''SILVER BULLET'' AND MAKE SURE THE ISLAMO-FASCIST COWARDS KNOW IT!

The company makes the claim that their product has been used widely throughout the US Armed Forces and by police tactical teams.

It's important to note that the company (which lists no physical address or contacts) claims it isn't at all discriminatory:


THIS PRODUCT IS FOR USE ON ARMED MUSLIM TERRORISTS ONLY.
WE DO NOT PROMOTE DISCRIMINATION AGAINST ANY RACE OR RELIGION, ONLY TERRORISTS.

Upon seeing the Website, most would likely wonder if these guys are for real.  The folks at the SPLC wondered the same thing, and sent off for the oil:


The gun oil arrived in a box postmarked from Courtland, Va., a town of about 1,300 people 50 miles southwest of Norfolk. Included with the gun oil were decals and playing cards – the ace of spades printed with the words “One Shot, One Soul” to put on the bodies of dead Muslims. Also included in the package was a biography of a World War I American general who supposedly executed 49 Muslims in the Philippines with bullets soaked in pig’s blood.

A gentleman who goes by the name "The Midnight Rider," a self-proclaimed "Servant of Yaweh" has a lot to get off his chest.   A few paragraphs into his description of the company's production, he unleashes a wandering, page-long diatribe that would make Ted Nugent blush, featuring nuggets like the following:


"We the PEOPLE" are sick of playing with a bunch of COWARDLY Voodoo Heathen cave dwelling
baby murderers. Believe what you want for your so-called "Religion of PEACE" but DON'T try to make
AMERICANS believe the ravings of MOHAMMED the pedophile murderer,or his sycophant followers
who advocate the wholesale slaughter of women and children and non-believers in the Muslim
Sharia type of NAZISM.

LAY DOWN YOUR WEAPONS AND GO BACK TO YOUR HOMES OR HOVELS OR whatever SHITPIT you come from or SUFFER THE CONSEQUENCE OF DEATH AND THE UNENDING PAIN OF ETERNAL HELL.

But let's be clear: they do not promote discrimination against any race or religion.
Posted by eshep on 5/26/2011