Can I Interest You In The Severed Head of the Saint of Genital Disease? 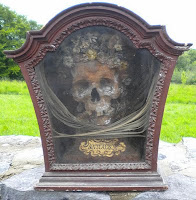 The severed head of a man said to be the patron saint of genital disease will go on auction in County Meath on Sunday.

The skull is allegedly that of St Vitalis of Assisi, an Italian Benedictine monk from the 14th century.

It belonged to an Anglo-Irish family from County Louth, and is housed in a Queen Anne case dating from the 17th century.

There has been no official verification of the claim.

St Vitalis was born in Umbria, Italy, and is said to have lived an immoral and licentious youth.

In an attempt to atone for his early sins, he later undertook pilgrimages to shrines throughout Europe, eventually entering the Benedictine monastery at Subiaco.

After leaving the monastery, he lived the remainder of his life as a hermit near Assisi.

It is said that he wore only rags and shunned all material wealth, with the exception of a basket which he used to fetch water from a nearby stream.

He died in 1370, and word of his sanctity soon spread due to reports of numerous miracles performed on those with bladder and genital disorders.