We keep hearing about the decline of empathy in America's youth.  Empathy is an evolved trait, and is not confined to humans, or even to primates.  Infants have been shown to exhibit empathic behavior. 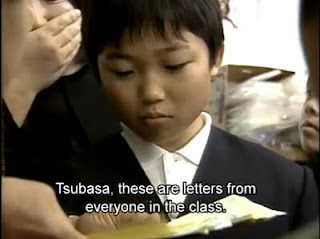 Although it's unclear what could account for a decline, Sarah Konrath of the University of Michigan at Ann Arbor theorizes that increased isolation in recent decades has played a significant role.  It's not that we are no longer "hard-wired" for empathy, but that it is more fluid than we had perhaps believed.  This is not necessarily bad news.  It means that, although we can become less empathic through increased isolation, we can encourage and nurture empathy to create a more empathic society.

Enter homeroom teacher Toshiro Kanamori and his 4th grade class in a primary school in Kanazawa, northwest of Tokyo. He, and his class, are the subject of an award-winning documentary entitled Children Full of Life. The film was released in 2003, but I was only recently made aware of it, and I think it deserves much wider circulation. Thankfully, for those like myself who missed this gem, the film can be viewed online in full.

The film should serve as an example to parents and educators everywhere. It is a powerful reminder that happiness is an important part of living a successful life. And in order for us to live happy, successful lives, especially in our modern and increasingly isolated society, we must learn the importance of compassion, openness, and communication.


This is a simple story, well told, that captures the essence of education. The program is an intimate portrait of a teacher and his classroom which subtlety presents a path for all educators who face the challenge of preparing students for life. Unobtrusively capturing extraordinary moments of drama and emotion inside a single Japanese classroom, the documentary demonstrates how individual teachers occasionally exhibit remarkable powers to shape the future of their students.

The documentary elicits tears of laughter and sadness as students and viewers discover the value of sharing powerful emotions, giving meaning to the life and death issues that arise in the classroom. Incidents of bullying, language instruction and outdoor activities are all opportunities to educate in this “School of Life”. Never preachy nor pedantic, the documentary reduces the myriad issues in education to a simple message - learning to care.

It is a powerful and inspiring piece of work.  It underscores the important role our educators play in our children's lives.  It urges us to address the changing educational needs of children in our rapidly evolving and increasingly complex societies.

Part 1 below (each successive part can be accessed at the end of each part):