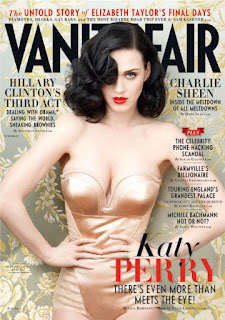 Katy Perry opens up in Vanity Fair about growing up in an Evangelical Christian household:


“I didn’t have a childhood,” she says, adding that her mother never read her any books except the Bible, and that she wasn’t allowed to say “deviled eggs” or “Dirt Devil.” Perry wasn’t even allowed to listen to secular music and relied on friends to sneak her CDs. “Growing up, seeing Planned Parenthood, it was considered like the abortion clinic,” she tells Robinson. “I was always scared I was going to get bombed when I was there…. I didn’t know it was more than that, that it was for women and their needs. I didn’t have insurance, so I went there and I learned about birth control.”


“I think sometimes when children grow up, their parents grow up,” Perry says of her evangelical-minister parents. “Mine grew up with me. We coexist. I don’t try to change them anymore, and I don’t think they try to change me. We agree to disagree. They’re excited about [my success]. They’re happy that things are going well for their three children and that they’re not on drugs. Or in prison.” Perry’s mother confirms that she is proud of her daughter’s success, telling Robinson, “The Lord told us when I was pregnant with her that she would do this.”

Husband Russell Brand is into Hinduism and meditation, she states, but she's not locked in to any brand of faith:


“I have always been the kid who’s asked ‘Why?’ In my faith, you’re just supposed to have faith. But I was always like…why?” she says. “At this point, I’m just kind of a drifter. I’m open to possibility…. My sponge is so big and wide and I’m soaking everything up and my mind has been radically expanded. Just being around different cultures and people and their opinions and perspectives. Just looking into the sky.”