'Here it is. I am dead': Blogger Derek Miller's Graceful Exit 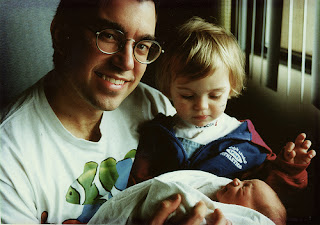 I became aware of Derek K Miller's blog, Penmachine, due to his widely circulated last post, simply titled, "The last post."  The Canadian musician, writer, and photographer died on May 3 at age 41. He had been diagnosed with colorectal cancer in 2007 and had chronicled his illness online.

Miller arranged for a friend to post his final words posthumously.  His last post went live the morning after his death.


Here it is. I'm dead, and this is my last post to my blog. In advance, I asked that once my body finally shut down from the punishments of my cancer, then my family and friends publish this prepared message I wrote—the first part of the process of turning this from an active website to an archive.

I haven't gone to a better place, or a worse one. I haven't gone anyplace, because Derek doesn't exist anymore. As soon as my body stopped functioning, and the neurons in my brain ceased firing, I made a remarkable transformation: from a living organism to a corpse, like a flower or a mouse that didn't make it through a particularly frosty night. The evidence is clear that once I died, it was over.

So I was unafraid of death—of the moment itself—and of what came afterwards, which was (and is) nothing. As I did all along, I remained somewhat afraid of the process of dying, of increasing weakness and fatigue, of pain, of becoming less and less of myself as I got there. I was lucky that my mental faculties were mostly unaffected over the months and years before the end, and there was no sign of cancer in my brain—as far as I or anyone else knew.

It turns out that no one can imagine what's really coming in our lives. We can plan, and do what we enjoy, but we can't expect our plans to work out. Some of them might, while most probably won't. Inventions and ideas will appear, and events will occur, that we could never foresee. That's neither bad nor good, but it is real.


I think and hope that's what my daughters can take from my disease and death. And that my wonderful, amazing wife Airdrie can see too. Not that they could die any day, but that they should pursue what they enjoy, and what stimulates their minds, as much as possible—so they can be ready for opportunities, as well as not disappointed when things go sideways, as they inevitably do.


I've also been lucky. I've never had to wonder where my next meal will come from. I've never feared that a foreign army will come in the night with machetes or machine guns to kill or injure my family. I've never had to run for my life (something I could never do now anyway). Sadly, these are things some people have to do every day right now.

The world, indeed the whole universe, is a beautiful, astonishing, wondrous place. There is always more to find out. I don't look back and regret anything, and I hope my family can find a way to do the same.

Miller's entire post can be read here, where you can also find his archive of posts. I'm thankful that Miller chose to share his thoughts with the world, including his very personal final thoughts on living and dying.  I wish that I had stumbled across his blog earlier, but he's left behind a great deal of wisdom, insight, and humor for us to explore. He will be missed.
Posted by eshep on 5/06/2011