Throughout the history of religion, people have found ways to reconcile views that might be at odds with their religious doctrine. 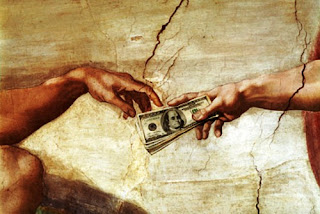 According to the Gospel of Matthew, Jesus said, "If you want to be perfect, go, sell your possessions and give to the poor, and you will have treasure in heaven. Then come, follow me." (Matthew 19:21)

He followed up with, "Again I tell you, it is easier for a camel to go through the eye of a needle than for a rich man to enter the kingdom of God." (Matthew:19:24)

A new Public Religion Research Institute survey reveals some interesting things about American's ability to reconcile their love of Jesus with their love of money.

Some interesting findings:
The most interesting finding, in terms of illustrating our amazing ability to find ways to reconcile religious views with personal views, was the following:
It's understandable that those with very little would agree with Jesus' words in the Gospel of Matthew. It's also understandable that those who are well off would find ways to interpret those words differently, or deem them as irrelevant in a modern society where we have charities and government programs to assist the less fortunate. (Rush Limbaugh seems to know precisely what Jesus would do.) At the end of the day, these surveys say more about human nature than anything else.

A few other findings worth noting:
There is a problem with static documents such as holy books and founding papers in that as the centuries go by, we find ourselves confronting an increasing number of ideas, conundrums, and complexities that the original writers could not have imagined in their wildest dreams. (Those who believe that The Bible is the infallible word of God would certainly disagree.)  We can no more imagine what the Founding Fathers would think about the regulation of agriculture biotechnology than we could imagine what Jesus would think of corporate tax loopholes. And when we attempt to distill the essence of a text for application in our complex modern world, we end up with wildly differing extrapolations. These extrapolations most often are self-serving and at odds with the basic philosophies exhibited in the text.

While we can certainly look to founding documents and sacred texts for guidance, there comes a point where the text is limited by its place in time, and we start making our own rules to validate our own actions and desires.  Often a shoehorn is involved.