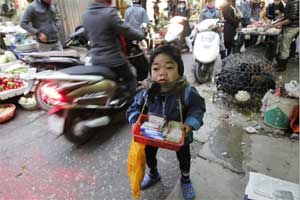 
Vietnamese with ailments linked to Agent Orange are undergoing a “detoxification” treatment involving saunas and vitamins that was developed by the Church of Scientology and which has been criticized as pseudoscientific.

Scientologists use the “Hubbard Method” to try to cure drug addiction and alcoholism. The church set up a center in New York after the 9/11 attacks offering a similar service for first responders who may have been exposed to toxins.

A group of 24 people arrived for treatment at a military hospital in Hanoi for a month, free of charge, Dau Xuan Tuong, deputy administrator at the Vietnam Association of Agent Orange Victims, said Thursday. He said 22 people underwent the treatment in 2011 in northern Thai Binh province.

“Their health has improved after the treatment, and some saw their chronic illnesses disappear,” he said. “We need to do more scientific research to determine its impact.”

Ya think, Doc? You do realize that science and Scientology don't really have anything to do with each other, right?

And who's funding this garbage?


U.S. Embassy spokesman Christopher Hodges said Washington was not funding the program and said “we are not aware of any safe, effective detoxification treatment for people with dioxin in body tissues.”

It wasn’t known what other medical care the participants were receiving. Scientology founder L. Ron Hubbard opposed psychiatry and the use of drugs for mental illness and addictions, but church members accept conventional medical treatment for physical conditions.

Actor Tom Cruise co-founded the New York Rescue Workers Detoxification Project, where participants were each given vitamins and nutritional counseling and participated in daily exercise and sauna sessions. He defended it at the time as helping the workers recover.

Critics, many of them scientists, have said there is no evidence the “Hubbard Method” does any good.

It was unclear if the Vietnamese government was aware of those concerns before agreeing to try the project.