Pat Robertson: Democrats Are The 'Party Of Gays, Godlessness And Whatever Else' 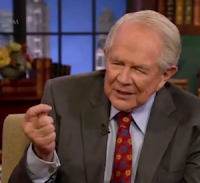 It's gotten to the point that it would be newsworthy if Pat Robertson didn't say something completely insane in his broadcast. He's a broken record of bigotry, senility, and illogic.

That being said, Robertson is downright outraged that the Democratic platform openly embraces marriage equality and the right to abortion.

Robertson, speaking on The 700 Club:


Back in the 1850s or 60s there was a charge that one party was the party of rum, Romanism and rebellion. I don’t know what you label the Democrats now but it’s the party of gays, godlessness and whatever else. I mean, same-sex marriage is in the platform, they want to go along with that as a right, I’m just astounded.
…
They can’t defend it and you ask yourself, you’re going to go before the American people and that’s going to be the face they’re going to present to America. You have insulted the Catholic Church with your rules, you have insulted right-to-work states, you have insulted certain union groups with your stand on the pipeline and now you’re going after God, it makes no sense but that’s what they want to do.