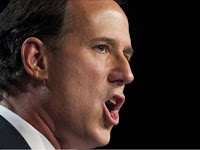 Rick Santorum, like many humans, has a problem with perspective.

On "Face the Nation," Santorum attempted to clarify his accusations that Obama's theology is "phony":


"I accept the fact that the president is a Christian," Santorum said on CBS' "Face the Nation." "But when you have a world view that elevates the earth above man and says we can't take those resources because its going to harm the Earth, it's just all an attempt to centralize power and give more power to the government."

Here are a few basic scientific considerations:
You do the math, Rick.

To think for a minute that man is the objective, you exhibit an embarrassing (and dangerous) level of ignorance about the vastness of time and space.

Someone who is capable of believing that homo sapiens are "the objective" is either deluded by their faith, or incredibly dense (and very likely both).