GOP Reproductive Ideology: Ridicule Is The Only Weapon

Between trans-vaginal ultrasound legislation and personhood initiatives, it is clear that the GOP is completely off the rails. One might think the train has stopped in the 18th century. 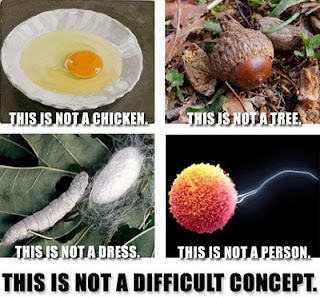 Thomas Jefferson once said, "Ridicule is the only weapon which can be used against unintelligible propositions." It's nice to see that the spirit of Jefferson lives on in halls of legislation (even though many conservatives would like to forget about him).

Take Yasmin Neal of the Georgia House of Representatives. In response to the insane attacks on women's reproductive rights, she authored a bill that would ban vasectomies.

"Thousands of children are deprived of birth in this state every year because of the lack of state regulation over vasectomies," wrote Neal in a statement. "It is patently unfair that men can avoid unwanted fatherhood by presuming that their judgment over such maters is more valid than the judgment of the General Assembly, while women's ability to decide is constantly up for debate throughout the United States."

Georgia House Minority Leader Stacey Abrams added, "What is more deplorable is the hypocrisy of HB 954's author. If we follow his logic, we believe it is the obligation of the General Assembly to assert an equally invasive state interest in the reproductive habits of men and substitute the will of the government over the will of men."

This came on the heels of another bit of legislation-as-ridicule, this time out of Oklahoma.

State Sen. Constance Johnson proposed an amendment to Oklahomas' personhood bill. The amendment was referred to as the "Every Sperm Is Sacred" Bill, after the brilliant Monty Python song from 'Monty Python's Meaning of Life.'

The amendment states, "[A]ny action in which a man ejaculates or otherwise deposits semen anywhere but in a woman’s vagina shall be interpreted and construed as an action against an unborn child."

It's a slippery slope.