The Greek philosopher Anaxagoras (500 BCE – 428 BCE) was onto something when he stated that the sun was not a god, but rather a red hot stone. (It's also worth noting that he was imprisoned for saying as much.) Granted, Anaxagoras was a little off on the physical properties of the sun, but he knew that there was a natural explanation for even the greatest mysteries of the cosmos.

Fast forward a few thousand years to St. Paul, MN where a communion wafer has turned "blood red" after being placed in a cup filled with water. 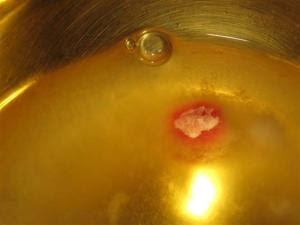 
[Rev. John Echert of St. Augustine Church] said the host fell to the floor as a member of the laity who is appointed to assist priests was distributing Communion at the 7 a.m. Mass on June 19, the Feast of the Holy Trinity. It was put in a ciborium, a container for the Eucharist - which is typical practice - with the expectation that it would be poured in a sacraium, a kind of special sink where items are washed into the ground not into a sewer system.

When the Rev. Robert Grabner, the church's parochial vicar, next looked at the cup the following Sunday, Echert said, "he noted a red color in the ciborium." Normally, he added, the host would dissolve in water within a day or two.

Grabner asked Echert to examine it.

"The host was a very bright red," Echert said. "On one side, it was completely red, and on the other side, it was red around the perimeter and it looked almost like the white of the host tended to have an appearance of a cross."

Echert said he transferred it to a glass bowl the next day. A day later, he saw the blood-red color.

"It appeared to be like the blood red of tissue," he said. "If I had not known what it was, I would have thought that there was maybe a small bloody piece of tissue. It was striking enough that there was no way I could have disposed of the remains of the host at that time with good conscience."

Clearly, this was the stuff of miracles:


"It was notable enough that, clearly, it was some phenomenon and not the ordinary way in which a host would dissolve...that we're familiar with," Echert said.

The archdiocese, which now has the host, is taking a "very cautious stance on the matter," spokesman Dennis McGrath said.

"I make no claims, and the archdiocese makes no claims, as to the likelihood of this being supernatural," Echert said. "But it is enough of a phenomenon, or unusual, that we will continue to examine this host."

He added: "I've never in my 24 years as a priest seen or been aware of a phenomenon where a consecrated host placed in water turns to this bright-colored red and continues in what I would call the blood-red color."

Word of the wondrous wafer eventually landed on several Catholic websites and blogs, sparking discussion and conjecture by some that it resembles the flesh and blood of Jesus Christ.

Anyone with a knowledge of religion is sure to have noted that the supernatural claims and miracles associated with biblical writings were far more fantastical, and more frequent, than those of modern day. It also might be worth noting that we didn't have the scientific understanding in primitive times that we have today, nor the luxury of crowdsourcing.

In simpler times, news of this bloody wafer might have spread via telegraph or word of mouth, and soon enough, people would be making pilgrimages to lovely St. Paul to view the flesh of the Lord. But thanks to the Internet, and to science, many pilgrims have been saved the trouble.


One blogger has raised the red bacterium, Serratia marcescens, as a possible explanation for the communion wafer turning red.

According to Microbe Zoo, a website developed by the Center for Microbial Ecology at Michigan State University, the bacterium grows on bread and communion wafers that have been stored in a damp place.

The site goes so far as to cite Serratia marcescens as the probable cause of the bloodlike substance that a priest discovered on communion bread in 1263, referred to as "The Miracle of Bolsena."

More-recent incidents have pointed to bacterium contamination, including a highly publicized instance in 2006 when people flocked to a Dallas-area church after a host turned red in a glass.

According to a report on Texas Catholic Online, the Dallas Diocese had the host analyzed by two University of Dallas biology professors who concluded it was anything but a miracle.

In a letter to the parish priest, Dallas Bishop Charles Grahmann wrote "... the object is a combination of fungal mycelia and bacterial colonies that have been incubated within the aquatic environment of the glass during the four-week period in which it was stored in the open air."

Archdiocese spokesman Daniel McGrath stated, "The Church does not presume supernatural causes for things that can have a natural explanation," an odd statement coming from the church, especially considering that whole Bible thing.
Posted by eshep on 7/15/2011