Sarah Palin: 'I Love That Smell of the Emissions' 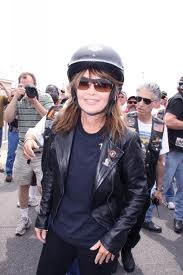 The International Energy Agency just released a report showing that greenhouse gas increased by a record amount last year. We had the highest carbon output in history.

Faith Birol, the chief economist of the IEA stated, "Such warming would disrupt the lives and livelihoods of hundreds of millions of people across the planet, leading to widespread mass migration and conflict. That is a risk any sane person would seek to drastically reduce."

Birol stated that we could avoid catastrophe if governments heed the warning.

Enter Sarah Palin, possible GOP candidate for President of the United States, who is currently traveling around the country on a mysterious bus tour.  Her first stop was at a motorcycle rally in Washington, DC, where she stated to reporters, "I love that smell of the emissions!"