Rick Perry: The Economic Crisis is God's Way of Bringing Us Back to Biblical Principles 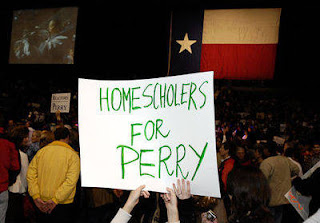 Texas Governor and possible GOP presidential candidate Rick Perry has not been shy about his alignment with the Religious Right. And not just the 'mainstream' Religious Right hate groups like the Family Research Council. We're talking extreme Christocrats.

If his unapologetic mix of church and state weren't enough to scare you, then how about this? He has the words 'Liberty' and 'Freedom' emblazoned on his cowboy boots. Scared yet? Take a look at the following clip of Perry on James Robinson's Life Today television show, in which he states that the current economic crisis is God's way of making America return to biblical principles and free us from our slavery to the government.

We already had a president who made war decisions based on biblical prophecy. And that didn't work out too well.