Today, the Presbyterian Church became the latest mainline religious denomination to begin to emerge from the Bronze Age. 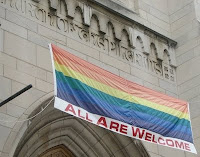 Non-celibate gays and lesbians will become eligible for ordination in the Presbyterian Church (U.S.A.) following ratification of a constitutional amendment that reverses decades of official policy.

The long-debated change came late Tuesday when a Minnesota presbytery, or regional governing body, voted 205-56 to ratify an amendment lifting an effective ban on gay ordination in the church constitution.

That vote by the Presbytery of the Twin Cities Area brought to 87 the number of presbyteries approving the change for the Protestant denomination based in Louisville, Ky. -- the majority needed to amend the constitution.

This hints that the momentum is building, as more and more liberal congregations have also voted to allow gay and lesbian clergy.
Posted by eshep on 5/14/2011