The Washington Post's On Faith column asked four prominent figures in fields of science and theology about Family Radio evangelist Harold Camping's calculation that the rapture will occur on May 21, 2011. The group of four included evolutionary biologist Richard Dawkins. Surely The Post knew that they were dropping a turd in the punchbowl. 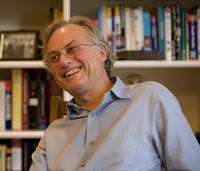 Q. While many are laughing at the suggestion, Camping’s followers are taking him seriously, bringing his message of impending doom to billboards and public spaces around the country. What does your tradition teach about the end of the world? How does end time theology impact real world behavior?

A. Why is a serious newspaper like the Washington Post giving space to a raving loon? I suppose the answer must be that, unlike the average loon, this one has managed to raise enough money to launch a radio station and pay for billboards. I don’t know where he gets the money, but it would be no surprise to discover that it is contributed by gullible followers – gullible enough, we may guess, to go along with him when he will inevitably explain, on May 22nd, that there must have been some error in the calculation, the rapture is postponed to . . . and please send more money to pay for updated billboards.

So, the question becomes, why are there so many well-heeled, gullible idiots out there? Why is it that an idea can be as nuts as you like and still con enough backers to finance its advertising to acquire yet more backers . . . until eventually a national newspaper notices and makes it into a silly season filler?


Evidence-free beliefs are, by definition, groundless. What my ‘tradition’ (or your ‘tradition’ or the Dalai Lama’s ‘tradition’ or Osama bin Laden’s ‘tradition’ or the bad-trip ‘tradition’ of whoever wrote Revelation) says about anything in the real world (including its end) is no more likely to be true than any urban legend, idle rumor, superstition, or science fiction novel. Yet, the moment you slap the word ‘tradition’ onto a made-up story you confer on it a spurious dignity, which we are solemnly asked to ‘respect’.

Science is not a tradition, it is the organized use of evidence from the real world to make inferences about the real world...Science knows approximately how, and when, our Earth will end. In about five billion years the sun will run out of hydrogen, which will upset its self-regulating equilibrium; in its death-throes it will swell, and this planet will vaporise. Before that, we can expect, at unpredictable intervals measured in tens of millions of years, bombardment by dangerously large meteors or comets. Any one of these impacts could be catastrophic enough to destroy all life, as the one that killed the dinosaurs 65 million years ago nearly did. In the nearer future, it is pretty likely that human life will become extinct – the fate of almost all species that have ever lived.

However it happens, the end of the world will be a parochial little affair, unnoticed in the universe at large.

Dawkins' full answer can be read here. The other three responses can be accessed here.
Posted by eshep on 5/11/2011