Robertson: The Bible Was 'Terribly Wrong' About Slavery, But Not About Homosexuality 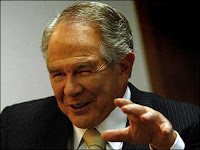 Evangelicals love to cherry-pick their scripture. They love to cite 'The Word of God' when it rails against homosexuality. "The Bible is quote clear," they'll tell you.

The Bible is quite clear about a lot of things that Christians have long dismissed: slavery, wearing blended fabrics, eating shellfish, executing people for petty offenses, etc.

Pat Robertson has a long history of hating gay people. "The Bible is so clear about homosexuality," he's said.

However, Pat, like many evangelical Christians, loves to cherry-pick.

"Despite what the Bible says, “We have moved in our conception of the value of human beings until we realized slavery was terribly wrong.”

Have we, Pat? It seems like just a few months ago, evangelicals were up in arms when Dan Savage suggested the same thing.


SAVAGE: We can learn to ignore the bullshit about gay people in the Bible the same way have learned to ignore the bullshit in the Bible about shellfish about slavery, about dinner about farming, about menstruation, about virginity, about masturbation. We ignore bullshit in the bible about all sorts of things. The Bible is a radically pro-slavery document. Slave owners waived Bibles over their heads during the civil war and justified it…We ignore what the Bible says about slavery because the Bible got slavery wrong.…If the Bible got the easiest moral question that humanity has ever faced wrong, slavery. What are the odds that the Bible got something as complicated as human sexuality wrong? 100 percent.

So, we have Pat Robertson admitting that the Bible was "terribly wrong" about slavery. To extend Pat's thoughts on the "value of human beings" idea into the treatment of the LGBT population doesn't seem to be much of a stretch, does it? It's not that radical a notion.

It will happen. Eventually. Unfortunately, we'll have to wait until bigoted dinosaurs like Pat Robertson die out.