Wouldn't It Be Better If Satan Was Responsible For Leviticus? 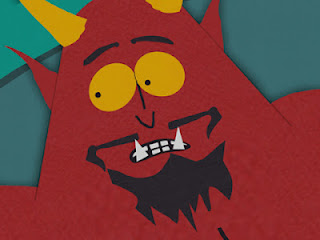 The Book of Leviticus is a doozy. Certainly an apologetic, with a little bit of shoehorning, can make it seem not so bad. It was, after all, written for a specific audience during a specific time in history for specific reasons.

Too often, however, everyday folks cherry-pick things from Leviticus to validate all sorts of ugliness, most notably homosexuality and same-sex marriage.

However, when we read more than just those few segments of Leviticus that might seem to validate some of our own personal prejudices, we see that these cherry-picked lines that are often held as God's truth in 2012, are nested in with a whole lot of downright horrible, or just plain ridiculous, commandments.

Take these for example:

"If a man lies with a woman during her sickness and uncovers her nakedness, he has discovered her flow, and she has uncovered the flow of her blood. Both of them shall be cut off from her people." (Leviticus 20:18)

"Your male and female slaves are to come from the nations around you; from them you may buy slaves. You may also buy some of the temporary residents living among you and members of their clans born in your country, and they will become your property." (Leviticus 25:44-45)

"Do not cut the hair at the sides of your head or clip off the edges of your beard." (Leviticus 19:27)

"And the daughter of any priest, if she profane herself by playing the whore, she profaneth her father: she shall be burnt with fire." (Leviticus 21:9)

"...and the swine, though it divides the hoof, having cloven hooves, yet does not chew the cud, is unclean to you." (Leviticus 11:7)

"...do not plant your field with two kinds of seed. Do not wear material woven of two kinds of material." (Leviticus 19:19)

"A man also or woman that hath a familiar spirit, or that is a wizard, shall surely be put to death: they shall stone them with stones: their blood shall be upon them." (Leviticus 20:27)

"But all in the seas or in the rivers that do not have fins and scales, all that move in the water or any living thing which is in the water, they are an abomination to you." (Leviticus 11:10)

Now, I don't care who you are, or what time you're living in, this is some of the worst advice you could possibly give to anyone, anywhere. As I often tell my children, 'I don't care what they did to you, violence is never the answer.' They understand this. God apparently does not -- at least not according to his word.

So often, when we bring up these insane passages from Leviticus, the Christian retort is something like, "Oh, well, Jesus came along and tossed that stuff aside. That's the old covenant. Jesus brought with him the new covenant."

Which is all fine until we also take into consideration that Christians believe Jesus and God to be one and the same. Jesus is, after all (according to Christianity), part of the Holy Trinity. Jesus is Lord, right?

So, this means we are to believe that God in his God form said a bunch of crazy stuff to a certain group of people. Then God in his man form came along and said not to pay attention to the stuff that he said in his God form because that stuff was a little much.  If God knew everything he knows now, and he should (he's God after all), his morality should not have changed over time -- or at least it should never, under any circumstances, at any time whatsoever, have involved child-killing or enslavement.

Take slavery (please!). You would think that under no circumstances could God, the source of morality for the three Abrahamic religions, possibly endorse slavery. It's not even like he was ambiguous about it. Leviticus is very clear on how slavery works, including the minor details of slave-keeping, -selling, and -trading. It's pretty embarrassing, actually.

The below video, by NonStampCollector illustrates just how horrible the slavery laws in Leviticus are, by presenting us with a scenario that would actually be more believable than believing that God would be cool with slavery: Satan, ever the trickster, takes a pen to God's manuscript, turning his very ethical guide on the treatment of other humans into a horrible, slavery-condoning nightmare. Only someone as terrible as Satan could possibly come up with such morality, right?

We can only conclude that flawed humans wrote Leviticus, that morality evolved over time, and that new scripture had to be written later to catch up with the human morality that allowed us to view Old Testament morality as immoral.

We can also conclude that if you use scripture from Leviticus, or anywhere else in the Bible for that matter, to validate the discrimination or mistreatment of other human beings for any reason, you're relying on the archaic morality of Bronze age desert tribesmen.