The Sagan Series: 'The Humans' 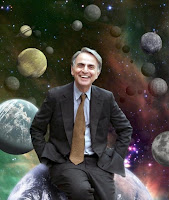 The ninth video in The Sagan Series is now available for viewing. It's a wonderful mash-up of video from a variety of sources, including Koyaanisqatsi, Human Planet, and Baraka, and featuring the voice of Sagan himself, reading from 'Wanderers: An Introduction' from The Pale Blue Dot.


"For all its material advantages, the sedentary life has left us edgy, unfulfilled. Even after 400 generations in villages and cities, we haven't forgotten. The open road still softly calls, like a nearly forgotten song of childhood. We invest far-off places with a certain romance. This appeal, I suspect, has been meticulously crafted by natural selection as an essential element in our survival. Long summers, mild winters, rich harvests, plentiful game—none of them lasts forever. It is beyond our powers to predict the future. Catastrophic events have a way of sneaking up on us, of catching us unaware. Your own life, or your band's, or even your species' might be owed to a restless few—drawn, by a craving they can hardly articulate or understand, to undiscovered lands and new worlds." - Carl Sagan, The Pale Blue Dot

The Sagan Series is an educational project working in hopes of promoting scientific literacy in the general population. Created by Reid Gover.