What Santorum Really Means By Indoctrination

Rick Santorum has said some silly things about higher education over the past week.

Not only did he say that Barack Obama was a 'snob' for wanting all Americans to go to college (funny, since Rick Santorum has a BA, an MBA, and a JD), but he also stated that “62 percent of kids who enter college with some sort of faith commitment leave without it.” 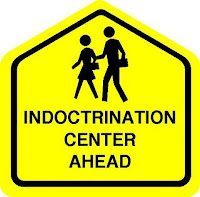 Where to start, right?

There's a few things going on here. First, we have Santorum's notion that to want kids to be educated and to succeed is snobbery -- all coming from a guy with several degrees. Isn't that kind of like the priest telling his congregation that they're a bunch of sanctimonious pricks for wanting their children to attend church?

Since when have we become a society that values an under-educated society? I have a feeling it has been ever since Barack Obama took office. This is also about the same time that we became a society that looks down on being healthy, boos the golden rule, and cheers for executions.

And where did Rick Santorum get this statistic that 62 percent of kids who enter college with a faith commitment leave without it? The claim is totally bogus.


A slight problem: multiple studies have found that the opposite is true — including the one that Santorum has reportedly been referring to.

A study published 2007 in the journal Social Forces — which PBS reports that Santorum’s claim is based on, although his spokesman didn’t respond to TPM’s request for confirmation — finds that Americans who don’t go to college experience a steeper decline in their religiosity than those who do.

Perhaps Santorum got his studies mixed up. A 2006 Harvard study found that 62 percent of college Republicans think “religion is losing its influence on American life.” Well, that's an entirely different thing, Rick. Republicans think a lot of things -- but that doesn't make them true.

The interesting thing about the Harvard study, if this is indeed where Santorum pulled his bogus figure, is that it found the opposite of Santorum's 'loss of faith' claim to be true. It found that “a quarter of students (25%) say they have become more spiritual since entering college, as opposed to only seven percent (7%) who say they have become less spiritual.”

Rick Santorum is scared of secular America. (He's not alone.) He knows that once children leave the nest, where they must think for themselves, they might actually embrace or formulate philosophies and life stances that are not in synch with their parents, or with their parents' faith.

He says he was ridiculed for his beliefs in college (quite frankly, he should've be ridiculed for some of them, such as his denial of evolution):

“I’ve gone through it,” Mr. Santorum said. “I went through it at Penn State. You talk to most kids who go to college who are conservatives, and you are singled out, you are ridiculed.”

“I can tell you personally,” he added, “I went through a process where I was docked for my conservative views.”

If Rick Santorum had his way, children would be home-schooled from kindergarten through graduate school, and would live under the same roof as their parents, and forced to attend church each and every Sunday.  We wouldn't want them to have to learn to defend their ideas about the world, would we? 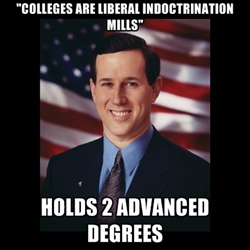 However, when we look at what indoctrination actually means, we find that indoctrination "is often distinguished from education by the fact that the indoctrinated person is expected not to question or critically examine the doctrine they have learned." We also see that "instruction in the scientific method, in particular, cannot properly be called indoctrination, in the sense that the fundamental principles of science call for critical self-evaluation and skeptical scrutiny of one's own ideas, a stance outside any doctrine."

What Santorum means by "indoctrination" is "critical thinking" and "skeptical scrutiny" and "critical self-evaluation" -- things that might lead a young person to question things they have been told.

What Santorum means by "indoctrination" is "discovering that the indoctrination received at home might not stand up to the skeptical scrutiny that is encouraged in a higher learning environment."

Santorum's rhetoric reeks of a man who knows his ideas don't stand up under scrutiny. His stance on evolution reveals quite a bit.


I think there are a lot of problems with the theory of evolution, and do believe that it is used to promote to a worldview that is anti-theist, that is atheist.


This is a man whose biggest problem with evolution isn't that he doesn't have enough data to formulate an opinion -- it's that acceptance of evolution might lead to questioning faith.

Rick, we are indoctrinated at every turn in our lives. Before we can even think for ourselves, we are told which sports teams to root for, which religion we believe in, which political party we align with. When we attend church as young children, we are told that, without a doubt, this particular religion will be our salvation.

If the biggest fear of higher education is that our children might stray from these beliefs once they leave the cocoon, then perhaps we should question the very beliefs we fear will be so easily unraveled.