There is a strange phenomenon occurring in conservative circles. It's a growing chorus of resentment towards the recipients of welfare (I've touched upon this phenomenon recently). This resentment is characterized by the assumption that welfare recipients are lazy, good-for-nothing, baby-having, divorced, drug and alcohol-abusing, freeloading minorities who are gaming the system (like raccoons). There is growing applause for Florida Governor Rick Scott's welfare drug-screen measure, which requires that applicants pass a drug test prior to receiving welfare. The eradication of welfare entirely is a common rallying cry for Libertarians and the Tea Party. 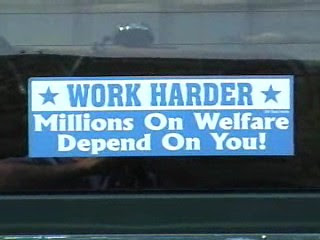 One of the most disturbing elements of this resentment is that so much of it seems to be coming from people who identify as Christians. While it is difficult to know what Jesus would say about government welfare assistance, we can assume that he would frown upon his followers' insistence that we turn our backs on "the least of these."

The chorus being sung by so many self-proclaimed Christians is drowning out the cries from atheists and humanists who can't believe what they're hearing from the faithful. I am not claiming that there are no non-believers who also call for welfare drug testing, or the end of welfare (or that there are not many charitable Christians who denounce such thinking), but I am saying that a plurality of non-theists and humanists adhere to a secular moral code that can in no way justify this thinking -- thinking that is clearly not in any way aligned with Christianity.

In my many discussions with people of faith who hold these anti-welfare/pro-drug screening views, nearly all of them relay anecdotes (often secondhand) that perpetuate the above characterizations of welfare recipients. These anecdotes are broadcast by talk show hosts, pundits, politicians, columnists, bloggers, and anyone with a Facebook account. These anecdotes help to paint a picture, but the picture is for the most part, pure fantasy. 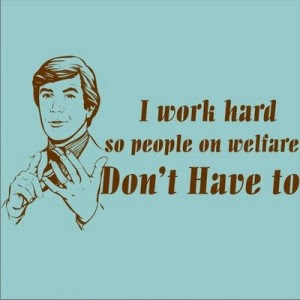 To be fair, nobody is denying that there are documented instances of welfare abuse. You will find some level of abuse in any system that distributes goods and services. What is unforgivable, however, is the gross mis-characterization of welfare recipients, and the charges that have been leveled against them, by so many Americans, many of them religious.

Let's take a look at the myths.

Next, let's take a look at some of the findings in a report (pdf) by CLASP which clearly show that drug screening of welfare applicants is wasteful, unproductive and unsustainable (not to mention crass and presumptive):


"Since few substance abusers are identified in tests, but many are tested, the cost of catching a drug abuser may run between $20,000 and $77,000 per person."

"In another study, drug use was as prevalent among employed TANF recipients as among the unemployed. This is also true of the general population, as most drug users have full‐time employment."

"In 1996, the National Institute of Alcohol Abuse and Alcoholism found that “proportions of welfare recipients using, abusing, or dependent on alcohol or illicit drugs are consistent with proportions of both the adult U.S. population and adults who do not receive welfare. Furthermore, Michigan, the only state to have imposed random drug testing on TANF beneficiaries, found that only 10 percent of recipients tested positive for illicit drugs, with 3 percent testing positive for “hard” drugs, such as cocaine. These rates are consistent with its general population. While other studies show that TANF recipients are somewhat more likely to have tried illicit drugs or have substance abuse disorders than the general population, the fact remains that a large majority of recipients do not use drugs."

Regarding gaming the system:


'To help overcome the former problem of unemployment due to reliance on the welfare system, the TANF grant requires that all recipients of welfare aid must find work within two years of receiving aid, including single parents who are required to work at least 30 hours per week opposed to 35 or 55 required by two parent families. Failure to comply with work requirements could result in loss of benefits.'

I know that none of the above provides a solution to the problem of a small number of people gaming the system, but I believe it illustrates that there are a lot of myths and misunderstandings about welfare recipients that have been fueled by the media, by our own stereotypes, and anecdotes we hear, and do no reflect reality.

Since Gov. Scott's welfare drug-screening program began in July, only 2% of those screened have tested positive. Two. Percent.

According to the Tampa Tribune, not only is the effort not yielding results, it's also costing taxpayers an arm and a leg:

Net savings to the state: $3,400 to $5,000 annually on one month’s worth of rejected applicants. Over 12 months, the money saved on all rejected applicants would add up to $40,800 to $60,000 for a program that state analysts have predicted will cost $178 million this fiscal year.

So, when we extract the bullshit mythology, this is what we're witnessing today in America:

God-fearing patriotic Americans have simply had it with these mostly white, working, married, adult US citizens, who need temporary assistance with basic needs until they can through a difficult time. They're so pissed off about it, they're willing to fork over an additional $178 million so that they can ensure that their money is not going to 2% of them.

These people want a smaller government that spends less. They want government out of their lives. And to accomplish this they want to pay the government hundreds of millions of dollars to collect Americans' urine in a cup.

In 2009, a California man was arrested outside a Yolo County market with a $3.99 bag of Tillamook shredded cheese in his pants he had not paid for. Due to California's three strikes law, the judge sentenced him to seven years and eight months in jail. It costs taxpayers between $50,000 and $100,000 a year to keep a man imprisoned.

Sometimes the solution is worse than the problem.