From the Guy Who Gave Us 'Veggie Tales': 'What's In The Bible?'

You'd have to have been in a coma for the past 18 years to not know about Veggie Tales, the Christianity-based anthropomorphic vegetable show (and movies) for kids. You'd also have to have avoided a Chick-Fil-A, as it seems there is perpetually some Veggie Tales tie-in with their kids meals. (Chick-Fil-A, of course, being the Christianity-based (and anti-LGBT) fast food chain where actual vegetables are scarce). 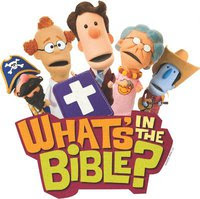 Veggie Tales co-creator, Phil Vischer, has created an online network for kids called Jelly Telly. His goal is to grow Jelly Telly into a Christian Nickelodeon of sorts. The venture is partly funded by Focus on the Family, James Dobson's tax exempt non-profit organization founded in 1977. The Southern Poverty Law Center has described Focus on the Family as one of a "dozen major groups [which] help drive the religious right's anti-gay crusade."

Lots of folks would assume that Jelly Telly and its programs are fairly benign, but the association with Focus on the Family should be enough to raise concern about whether any of the 'Christian values' threaded through Jelly Telly's programming also help drive the religious right's ideology into the minds of young children.

One Jelly Telly property that is gaining in popularity is a new DVD series based on the network titled What's In The Bible. The show features a mix of puppetry, animation, and musical performances. Kind of in the same vein as Jack's Big Music Show or The Muppet Show.

In an introduction to the series, Phil Vischer tells us that the Bible is the "most widely owned, least widely read in history. It sits on more shelves, gathering more dust, than any book in the world." I would agree with him there. He continues, "And yet this book holds the keys to understanding our lives." That certainly is the opinion of many.

Vischer says, "We have a crisis in the church today. Sixty-five percent of kids are dropping out of church as soon as they graduate from high school. We need to do something about this."

What's Phil going to do? He continues: "We're gonna walk kids through the Bible all the way from Genesis to Revelation and answer their big questions about who wrote it, and where it came from, and why we can trust it, and what difference does it make."

The series contains 5 DVD's, and I have not viewed the material outside of the clips that can be found online, but from what I can gather, the series steers clear of the tired fundamentalism associated with Young Earth Creationism and biblical literalism. So that is somewhat of a relief.

For example, it was refreshing to see that they describe up front how the Bible is a collection of writings (including letters, poems, etc.) written by over 40 people over the course of 1600 years, instead of insinuating that it's one book written by God which should be taken 100% literally.

However, as a secular parent, I personally am not too crazy about the idea of presenting The Bible in this way to children (Christian or otherwise).  While I certainly believe that some of The Bible's themes (i.e. empathy, good will, sacrifice, compassion, etc.) are important to instill in a child at a young age (these are not unique to Christianity, or to any religion), I think many of the Bible's themes, even some of those simplified and presented here in this series, are capable of doing more damage to a child than people realize.

I'm all for religious literacy.  I think too many people, including the devout, do not know enough about religion.  However, there is a big difference between teaching about religion and religious indoctrination, which is precisely what is going on in What's In The Bible?.

We don't learn from the series that "many people believe X and Y." We learn that, "This is the truth, straight from God, and this is the doctrine you must follow to avoid misery in life." Of course, I expect as much from Phil Vischer and Focus on the Family. He's not teaching Religion 101 to children. This is not a Unitarian Universalist show.  He's planting the seeds of Christian faith (and all that comes along with it, good and bad) in the minds of impressionable children who have no reason to reject what they are being spoon-fed.

Phil seems to have taken to heart the Jesuit maxim, "Give me a child until he is seven and I will give you the man."

While I am sure that many children enjoy the series (there are quite a few children's reviews on YouTube, many of which aren't terribly convincing), and while I'm sure that many of Vischer's young viewers will grow into fine grownups, I can't help but think about the ones that are being primed for a life of Christian exceptionalism.  To be indoctrinated at a young age with the belief that there is only one route to salvation, and that thinking differently will lead to misery and damnation, is to be primed for intolerance (not to mention undue anxiety and guilt).  Sure, this is just a t.v. show, one that does the same thing that Sunday school did for previous generations, and many of us turned out just fine. But Sunday school was never presented with such production value, and quite honestly most of us didn't pay much attention.  Vischer's intention is to get the child's attention by imitating the entertainment they see on Clubhouse Disney and Nick Jr., and then start in with Genesis, Exodus, and Leviticus.

Granted, much of children's programming is irreverent, abstract, and sometimes a little creepy (Barney, anyone?), but I would think some of this series' segments could be rather terrifying to a child, because the show speaks about the child -- about her life (and afterlife), her soul, and her fate as it relates to her behavior and her beliefs.  This, when you think about it, is really quite heavy, and quite disturbing for children's programming.  The child is presented with concepts that appear to have serious implications. Yo Gabba Gabba it's not.

For example, if we view the section on Genesis below, from a young child's perspective, we learn that God is male, that we shouldn't trust ourselves (it will make God angry at us), and that sins are small terrifying monsters that will attack you, ride around on your back forever, and cause facial blemishes.

I kid (sorta), but young children do not need to be saddled with supernatural concepts of salvation, eternal damnation, and sin.  Young children can be taught to be moral, compassionate, and ethical without invoking the supernatural, and without employing guilt, insecurity, and fear.

The truth is, even the above segment, which is actually some fucked up shit to lay on a toddler when you think about it, is tame in comparison to what's really in the Bible.

At what point, Phil, are you going to tell the kids about what else is in the Bible: slavery, selling your daughter, dashing babies against the rocks, killing kids who sass their parents, killing brides who are not still virgins, killing those who follow other religions, women as submissives who cannot teach, killing those who work on the sabbath, etc., etc.  I look forward to seeing those episodes.

My point in bringing up those barbaric passages is that, despite the fact that the Genesis clip above does not contain killing or raping or slavery does not make it any less distressing to a child.  In fact, describing how ancient civilizations committed barbaric acts for their god is much more abstract and less harmful to a child than saddling them with the concepts of sin, damnation, and pleasing an all-knowing, always-watching, supernatural man in the sky who holds their very fate in his hands.

What do I suggest as an alternative to What's in The Bible?  What alternative means do we have to instill our children with morality, ethics, and compassion?  We can best serve our children by teaching them, in real world, non-supernatural terms, why it is important to treat others with compassion and respect, and why it serves society to act morally.  We can best serve our children by teaching them about the world around them -- its people (and their wide range of beliefs), its cultures, and its beauty. We can explain to them why humanity rewards compassion and honesty, and why harmful actions are rejected. We can even point to examples of this that predate monotheism.  We can draw from religion, for sure (religious literacy, after all, right?).  Many religious traditions feature wonderful stories that highlight the merits of being a moral person -- they are literature, after all.  But there are just as many, if not more, wonderful stories (or other means of teaching) that fall outside of religion, and which are just as effective (and which don't have those pesky raping, killing, slave-holding parts to avoid).

While many atheists and secularists believe that children should be shielded from religion, I tend to believe that they need to learn about it.  Our culture, especially here in America, is steeped in religion. Our wars are based partly on religious clashes. Clashes the world over have at their root religious disagreements.  To shield a child from knowledge of religion is not much different than shielding them from history or biology.  However, the key is teaching children about religion in the way that we teach them about different cultures. Muslims believe X. Buddhists believe Y. Christians believe Z. Etc., etc. Teach them that even within each religion, there exists an entire spectrum of beliefs. Teach them that religion can be used for good and evil, and provide them with examples.  And most importantly teach them that they can choose what (or if) they believe when they feel they wish to make that decision.  And most importantly, that they can change their minds.

So, I say, "Thumbs down, Phil Vischer." "Thumbs down, What's In The Bible."  I appreciate that you're not telling children that the earth is 6,000 years old, that people cohabited with dinosaurs, or that homosexuality is an abomination.  But I do think that you're putting blinders on children. (I also realize this might be your intention.)

If there were a way to groom children into a life of Christian exceptionalism, serving up religious dogma masquerading as a Nick Jr.-style musical puppet show wouldn't be the worst way to go about it.
Posted by eshep on 7/01/2011