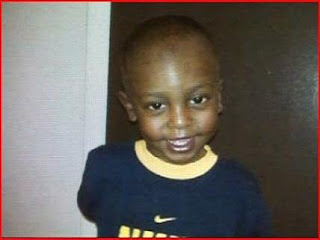 Jadon Higganbothan was shot in the head because Moses believed that the 4-year-old was gay.

According to the News and Observer:


Sometime in October 2010, prosecutors told the judge, one of the women told the defendant that Jadon had hit another child's bottom, and Moses retaliated because he thought the boy might be homosexual - partially because the child's father had left his mother.

Homosexuality, Cline contended, is frowned upon by the Black Hebrews, so the defendant asked the boy's mother to get rid of him.

Moses then ordered two of the other women to set up computers and speakers in the garage, prosecutors contend, then the defendant took the boy into the garage, where music and the Lord's Prayer in Hebrew blared, and a gunshot sounded. One of the women told investigators the boy was shot in the head.

Some of the women cleaned up his bloodied body, prosecutors said, then put it in a suitcase in the master bedroom until Moses complained about the smell.

Antoinetta McKoy was killed within weeks or months of the boy (the prosecutors are unsure of the exact time of death). Prosecutors maintain that, according to a diary entry, McKoy feared that "Lord" might kill her because she found out she was unable to have children.

McKoy's body was kept in a trash can inside the home before it was buried in a shallow grave near the boy's, according to prosecutors.
Posted by eshep on 7/09/2011