The Great Zombie Uprising Of 33 A.D.: Jesus Wasn't The Only One Who Rose From The Dead

I stopped being a Christian not because I stopped believing in empathy, compassion, and kindness, but because I couldn't accept the main tenets of Christianity -- mostly the supernatural stuff.

Christian theology states that Jesus suffered, died, was entombed, and then was resurrected from the dead. He not only came back to life (which might be half-way believable to a skeptic, given the fact that in biblical times, it might have been easy to declare someone dead prematurely), but he ascended bodily into heaven. This means that Jesus' body floated (of flied) up into the air and into Heaven.

If we're honest with ourselves, this is very far out stuff. There is no reason to believe, given what we now know about life, death, consciousness, and the self, that the body of a human being could come back to life and then float up into space. There is also no science to explain how, without a functioning brain, a person could retain any sense of their former living self in any type of afterlife. (Of course, the claim is that Jesus wasn't just a normal human being, but more on that later.)

I do realize that most Christians actually do believe that the resurrection actually occurred:


In the 2008-2009 wave of the U.S. Congregational Life Survey, 94 percent of evangelicals, 91 percent of Catholics and 78 percent of mainline Protestants said Jesus was raised bodily from the dead after his crucifixion.

Jesus' resurrection from the dead was an actual event, said three-quarters of the more than 25,000 respondents to congregational surveys offered by the Hartford Institute for Religion Research from 2004 to 2010. Most of the participants were mainline Protestants.

More than two-thirds of Christian respondents, including 84 percent of black and evangelical respondents, strongly agreed with the statement, "Jesus Christ physically rose from the dead," according to the Portraits of American Life Study.

I also believe that many of these respondents haven't really sat down and thought about what is required to actually believe the resurrection to be true.

Resurrection aside, there are some pretty amazing claims made in The Gospel of Matthew that are sorely overlooked by the average Christian. In fact, having been a Christian myself for a good part of my life, I was kind of amazed to have been made aware of this particular passage.

After Jesus' crucifixion and resurrection, Matthew 27 describes, quite simply, a major zombie uprising:


At that moment the curtain of the temple was torn in two from top to bottom. The earth shook, the rocks split and the tombs broke open. The bodies of many holy people who had died were raised to life. They came out of the tombs after Jesus’ resurrection and went into the holy city and appeared to many people.

This is fairly clear in the text. Zombies actually rose out of the ground and walked into the city and certainly scared the bejesus out of people. What in the world are we to make of this? 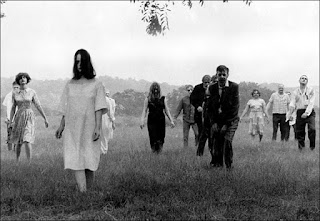 I don't know. I'm no theologian, and I'm sure apologetics have found a way to explain it. But I believe one of the big takeaways from this passage is this: The Bible should not be taken literally. If you do take it literally, it is rife with claims that, quite honestly, are no less fantastical than the claims made in Greek or Roman mythology, or Scientology, for that matter. The only difference is that you likely have heard them since birth, and hence, they seem as true as the crossing of the Delaware.

As comedian David Cross said, "The Bible is the world's longest game of telephone." There is probably a great deal of truth to that. It doesn't make the Bible sinister, or counterfeit. It makes it exactly what it is: a long oral history put to paper in a great undertaking that took hundreds of years, with many different authors writing to many different audiences for many different reasons, in different languages. Throw in some major squabbles over content and purpose, the expulsion of several books, significant editing, and pseudonymous writing, and you have a complex, if not flawed, collection of writing. We also have to take into consideration the fact that the Gospels, which many believe to be eyewitness accounts of the life of Jesus, were written many years after Jesus' death. The first Gospel accounts (Mark) did not appear until 40 years after Jesus died. If we take into consideration the life expectancy at time of the writing, that is quite a bit more than a lifetime.

C.S Lewis posed to us his 'trilemma': Jesus was either a liar, a lunatic, or Lord.

Lewis is forgetting a fourth option: Perhaps Jesus never made the claims to begin with. This is not a radical suggestion.

Regardless, there is much to gain from the observance of Easter. It is, after all, a celebration of rebirth that echoes other springtime rituals predating Christianity. Its symbols and traditions reverberate all throughout human history.

There's certainly no reason to let a couple of zombies get in the way.