Reluctantly In Defense of Terry Jones 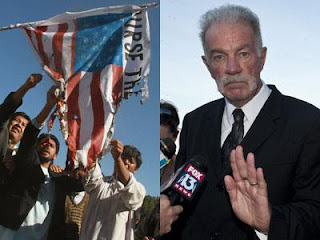 The Terry Jones Quran-burning flap certainly has ignited fierce discussion across the globe. Jones, who burned the Quran after a mock trial in which he declared the book to be guilty of crimes against humanity, is receiving his fair share of criticism -- and death threats (the FBI states that Hezbollah has a $2.4 million bounty on his head.)

While I have no lack of concern for our men and women serving in the Middle East, I don't quite agree with those who are blaming Jones for the brutal deaths of Americans. Is Terry Jones ignorant? Yes. Is he needlessly fanning the flames of anti-American sentiment in the Muslim world? Yes. Is he a hate-monger on par with Reverend Fred Phelps of the Westboro Baptist Church? Without a doubt.

All that being said, we can choose to blame the beheadings of American citizens on a man who set fire to a book, or we can blame those who did the beheading.

Terry Jones is clearly a man who does not understand (or does not care) that our free speech comes at a cost. "With freedom comes responsibility," and all that.

These beheadings were the result of religious fanaticism and scriptural literalism. If Terry Jones had drawn a cartoon of the Prophet Muhammad, and had he not already shown his colors as a religious extremist himself, Americans would be supporting him in droves.

There are two lessons to learn here. One is that although we enjoy freedom of speech, we need to understand that our actions have consequences. The other is that we have to stop accepting that people will behead other people for disrespecting their religious beliefs.

Terry Jones is a grade-A douchebag. But sometimes it takes a douchebag to remind us that we should never comprimise our freedom. It took a juvenile cartoon in Larry Flynt's Hustler Magazine to remind us that free speech includes the right to be distasteful and offensive. Granted, nobody died as a result of that cartoon. But had Southern Baptists become so enraged as to behead readers of pornography, would the correct response be to jail the cartoonist?

If, as a result of the violent response to the Quran burning, we limit what we can and cannot say about religion, we become less free as a society. (Obviously, hate speech is another matter.)

It is insensitive, ignorant and stupid to do what Terry Jones did. But it is completely and utterly insane to take an innocent human being's head off because someone else did something offensive.

Unfortunately, until people can get their heads out of the Bronze Age, people will be willing to kill other people due to religious beliefs. But by accepting that people will die for offending religious beliefs, we are complicit in impeding the progress necessary to eliminate such needless bloodshed.
Posted by eshep on 4/04/2011