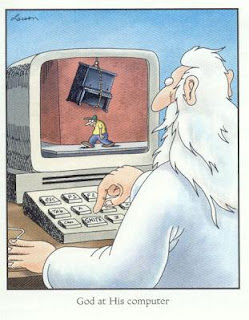 The results of the study was conducted by Azim F. Shariff at the University of Oregon and Ara Norenzayan at the University of British Columbia and the results were published in the Journal for the Psychology of Religion.  The findings are based on experiments designed to put students' honesty to the test.  They were given a computerized math test and were informed of a software glitch in which the answer to each question would be revealed after several seconds.  The students were instructed to press the space bar after reading each question to prevent the answer from showing up.

The experiment showed that those who believed in a forgiving god, rather than a punitive god, were significantly more likely to ignore the instructions to suppress the correct answers.

Some of Shariff's comments on the findings:

"Taken together, our findings demonstrate, at least in some preliminary way, that religious beliefs do have an effect on moral behavior, but what matters more than whether you believe in a god is what kind of god you believe in. There is a relationship: Believing in a mean god, a punishing one, does contribute to cheating behavior. Believing in a loving, forgiving god seems to have an opposite effect."

"According to the psychological literature, people who believe in God don't appear to act any more morally than people who don't believe in God. We wanted to look deeper at particular beliefs. One idea is the supernatural punishment hypothesis: Punishing counter-normative behavior - immoral behavior - has been an important part of living in societies. Societies don't get far without regulating moral behavior."
“The idea that gods used to be more authoritarian vengeful agents is consistent with the idea that … the initial role of religions was to foster moral behavior which made cohesive cooperative societies in a time where there were no secular laws, policing systems.  And so the idea of having moral systems and moral regulations outsourced to a punitive agent was a very effective thing in religious societies.”

Although I have not read the entire study, I'm curious as to why the researchers did not extend their study to those who lack a belief in God.  Shariff's comments on the origin and evolution of religion, and his suggestion that a punitive agent is more effective in regulating moral behavior, provoke questions about the growing number of secular societies with low crime rates.  I'm also not so sure about the experiment to begin with. The passive receipt of information via failing to actively rectify a software glitch is a little too ambiguous to indicate a clear moral failure.  But perhaps that's my lack of religion talking.
Posted by eshep on 4/21/2011