LifeWay Christian Resources has dropped A Year Of Biblical Womanhood, by award-winning Evangelical author Rachel Held Evans, over her use of the word 'vagina.'

Meanwhile, LifeWay will continue selling a book that condones murder, acts of genocide, slavery, and contains acts of drunken incest, oral sex, and the collection of 200 dead men's foreskins.

That book would be the Bible, LifeWay's number one seller. 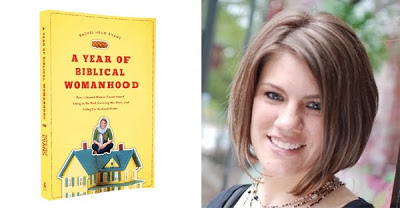 Evans' book is an entry into the 'do something for a year and write about it' genre. In 'A Year of Biblical Womanhood,' Evans writes of her experience living as a woman under the Bible's strict guidelines, including "growing out her hair, making her own clothes, covering her head, obeying her husband, rising before dawn, abstaining from gossip, remaining silent in church, and even camping out in the front yard during her period."

What's LifeWay's beef, then, if Evans is simply describing her womanly allegiance to the Bible?

Here's the passage (emphasis mine) that severed her ties with LifeWay (Evans refused to change the manuscript after requests to do so):


I signed my first abstinence pledge when I was just fifteen. I’d been invited by some friends to a fall youth rally at the First Baptist Church, and in the fellowship hall one night, the youth leader passed around neon blue and pink postcards that included a form letter to God promising to remain sexually abstinent until marriage. We had only a few minutes to add our signatures, and all my friends were signing theirs, so I used the back of my metal chair to scribble my name across the dotted line before marching to the front of the room to pin my promise to God and to my vagina onto a giant corkboard for all to see. The youth leader said he planned to hang the corkboard in the hallway outside the sanctuary so that parents could marvel at the seventy-five abstinence pledges he’d collected that night. It was a pretty cheap way to treat both our bodies and God, come to think of it.

Evans wrote about the Christian bookstore "chokehold" on her blog:


Christian bookstores have developed a reputation for producing a highly sanitized customer experience, purging from their shelves any language, content, or theology that doesn’t meet their uber-conservative standards. Walk into your local LifeWay and you will find plenty of Precious Moments statues, specialty Bibles, Veggie Tale movies, and Thomas Kinkade prints...but little trace of art or literature that intrigues, agitates, and inspires—as true art should! The Christian bookstore experience is, in a word, safe. Butsafe is not how Christians are called to live, and safe is not what artists who are Christians are called to create. In fact, based on LifeWay’s own standards, the Bible itself—which includes profanity, violence, and sex—should be banned from the shelves.

What most people don’t realize, however, is that the problem of sanitized Christian bookstores extends far beyond the inventory on the shelves to create an entire Christian subculture that is so sanitized and safe it often fails to produce art that is relevant to our culture or our lives.

Later in the post, Evans writes candidly about her own experience with LifeWay, saying that she was asked to take out words like “hell,” “damn,” and “kick-ass.”


I showed them the list of taboos for Christian romance novels.

Peretti shook his head at the prohibitions against dancing, nudity, and words like 'whore.' "They'd never publish The Bible!" He recalled a complaint he'd heard from another Christian writer: "You can kill and stab and shoot, as long as you have all your clothes on when you do it, and don't swear."