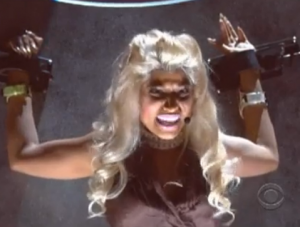 Nicki Minaj's performance at the Grammys last night probably had a lot more to do with ambition than blasphemy.

As we've learned from Madonna and Lady Gaga, there may be no better way to gain worldwide attention than to provoke the ire of the Catholic Church.


Nicki Minaj, fresh off looking like a fool with Madonna at the Super Bowl, showed up last night on the red carpet at the Grammys with a guy dressed like the pope. This was just a prelude of what was to come.

Minaj's performance began on stage with a mock confessional skit. This was followed by a taped video depicting a mock exorcism. With stained glass in the background, she appeared on stage again with choir boys and monks dancing.

Perhaps the most vulgar part was the sexual statement that showed a scantily clad female dancer stretching backwards while an altar boy knelt between her legs in prayer. Finally, "Come All Ye Faithful" was sung while a man posing as a bishop walked on stage; Minaj was shown levitating.

None of this was by accident, and all of it was approved by The Recording Academy, which puts on the Grammys. Whether Minaj is possessed is surely an open question, but what is not in doubt is the irresponsibility of The Recording Academy. Never would they allow an artist to insult Judaism or Islam.

It's bad enough that Catholics have to fight for their rights vis-à-vis a hostile administration in Washington without also having to fend off attacks in the entertainment industry. The net effect, however, will only embolden Catholics, as well as their friends in other faith communities.