NC Values Coalition Mailer: 'On Aug. 1st I Ate At Chick-Fil-A. On Nov. 6th I Will Vote'

The slogan of the campaign is "Pledge to Vote: From the Pews to the Polls." It appears that Fitzgerald & co. want to capitalize on the overwhelming support for a certain anti-gay chicken sandwich establishment. 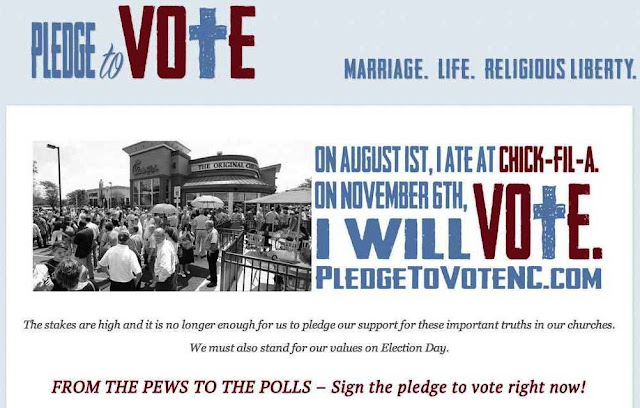 Fitzgerald also released a statement after it was announced that the Democratic platform would support gay marriage:


“This is historic. Marriage has been the union between one man and one woman since before North Carolina became a state and before America became a country. Marriage is a union defined by God – not national political parties. The fact that the national Democrat Party believes it can re-define marriage in a party platform is contrary to our founding principles. It is radical and extreme, and I believe the American people will not stand for it. They will not embrace leaders who embrace homosexual marriage.”

The latest NC Values Coalition email follows closely on the heels of Fitzgerald's bizarre assertion that Equality NC's most recent campaign video depicting an anti-LGBT gun owner repeatedly shooting a pro-equality yard sign was "a thinly-veiled threat against supporters of traditional marriage and can have no other purpose than to incite hatred."
Posted by eshep on 9/13/2012