Bianca's Story: 'God Is Going To Punish You For Being Gay' 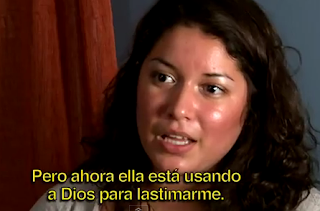 Bianca is what she describes as a triple threat: Latina, queer, and a woman. She is an activist, an artist, and does theater in LA. She is also co-founder of Legalize Love, "an organization that empowers the oppressed through critical pedagogy."

One might think that such a strong, energetic, creative, and self-assured individual would be the product of a compassionate and supportive family. And while that is partially true (Bianca's brothers have always been supportive, and call her a hero), Bianca's journey was anything but smooth, and she almost didn't live to tell her story.

As part of an ongoing series of videos (below), An Honest Conversation, Bianca relates her story, one that she says is not so different from other LGBT Latinos.

"My grandmother won't talk to me. She comes from El Salvador. Religion, for her, was a survival...that's how she got by. But she's using God in a way to hurt me. She openly says she's ashamed. She says, 'God is going to punish you for being gay.' She even told me once I would end up with AIDS."

"Whether you go to church every Sunday or not, it's part of the culture in a way. A lot of the Latinos in LA -- they're first generation, so they come from places where religion plays a huge role."


Now, I come from a very conservative family, I mean I went to catholic school from the age of 4 up to 11 so I completely understand how religion and the Latin culture can keep someone in the closet for fear of losing their families...my dad doesn’t fully accept me. I mean he says he’s going to love me regardless, but the fact of the matter is he doesn’t.

He still thinks I’m going to grow out of it, and refuses to meet my girlfriend, not to mention no one from the family is to know about my choice, and lastly he refuses to talk about it. I mean who is he to judge me, he cheated on my mom and broke a marriage, however he is an out and proud republican who believes gays should not have the right to marry because it breaks the sanctity of marriage, ironic right? Parents please don’t cause that pain to your kids, what you think of them, means more to them than you may think. They need you because we live in a tough world, and if you don’t fight for them, well who will?

I know it may be hard for you, but remember (especially you moms) you gave birth to them, and when you first held them you loved them for being your child, and being queer is nothing more than being a boy or a girl, it’s who they are and it can not be changed.

Her story is unfortunately too familiar. But thankfully, as more and more young people like Bianca open up and share their stories, we can erase the shame that is brought on by religion-based bigotry, culture, and ignorance.


As I set out to help others, I really ended up helping myself. There are too many kids out there taking their lives and self-injuring because they feel like they are sinning and enough is enough! We all need to come together and speak up for them because if we don’t, who will, you know? In Lakesh, which is Mayan and means, you are my other self.

The reason why I bring this up is because has corny as it may seem we are all connected, and that is why I decided to be in the series, because I hope that my struggle can open hearts and perhaps prevent someone from being shunned, bullied, or perhaps even beaten. We are all each others keepers, and once we beginning practicing what is truly preached in the churches, we can start to move forward as a whole, and stop this taboo of queer being wrong. I understand that many latino families have their beliefs, but we can not allow for our beliefs to break our families or to take lives.